A Descriptive Study of Emotional Well-Being Among Women in Ghana 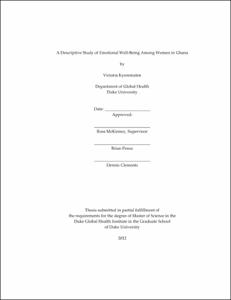 Mental illness is prevalent worldwide in all cultures with varying manifestations. Its socioeconomic impact cannot be underestimated. Mental health accounts for as much as 14 percent of the global disease burden (Prince, et al. 2007) and depression is ranked as the fourth leading contributor to the global disease burden. Nevertheless, mental health remains largely ignored worldwide, especially in developing nations.

This cross-sectional study, examines depression in two rural districts in Ghana, West Africa. Ghana, like many African nations, consists of many ethnic groups, with lineage networks that dictate personal and public behaviors. Ghana is unique in that approximately half of the population belongs to the Akan, matrilineal clan. The study hypothesized that by examining two clan groups (the Akan and Ga-Adangbe) that differed in lineage a statistically significant difference in rates of depression would be ascertained.

Upon receipt of ethical board approval from the Duke University Institutional Review Board in Durham, NC and Noguchi Memorial Institute for Medical Research Institutional Review Board in Ghana, researchers using the Depression Anxiety Stress Scales Short form (DASS-21) in a geographically randomly selected sample to measure depression as well as anxiety and stress among the participants and a demographic survey, researchers compared the prevalence of depression between the matrilineal Akan clan and patrilineal Ga-Adangbe clan. Data was analyzed using STATA 11.0.

The results indicate a rejection of the null hypothesis. There is a statistically significant difference in depression score between the women in the Ga-Adangbe clan and Akan clan. This study reports high co-morbidity of anxiety and stress with depression. Further research should expand to include other tribes in Ghana and other mental illnesses.