Theories of Everything: Science Fiction, Totality, and Empire in the Twentieth Century 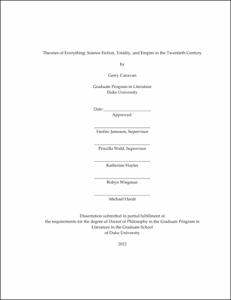 This dissertation, "Theories of Everything: Science Fiction, Totality, and Empire in the Twentieth Century," argues that the ideology of empire shares with science fiction an essential cognitive orientation towards totality, an affinity which has made science fiction a privileged site for both the promotion and the critique of imperial ideologies in the United States and Britain in the twentieth century. The cultural anxieties that attend a particular moment of empire are especially manifest in that period's science fiction, I argue, because of the importance of science and technology: first as a tool of imperial domination and second as a future-oriented knowledge practice that itself has totalizing aspirations, grasping with one hand towards so-called "theories of everything" while with the other continually decentering and devaluing humanity's importance in larger cosmic history. As technological modernity begins to develop horizons of power and knowledge increasingly beyond the scale of the human, I argue, science fiction becomes an increasingly important cognitive resource for navigating the ideological environments of modern political subjects.

In particular I argue for a new understanding of the science fiction genre focused on an aspiration to totality: cognitive maps of the historical world-system on a immense, even hyperbolically cosmic, scale. In the twentieth century empire itself is one such totality, insofar as imperial ideology asserts the existence of a historical logic of progress that ultimately culminates in the empire itself. Such totalities necessarily provoke thoughts of their own inevitable negation, an eventuality I organize around the general category of "apocalypse." In three chapters I consider apocalyptic texts concerning entropy and evolution (chapter one), environmental collapse and ecological futurity (chapter two), and zombie catastrophe (chapter 3). In particular I focus on literary work from Isaac Asimov, H. G. Wells, Mark Twain, Olaf Stapledon, Margaret Atwood, Ursula K. Le Guin, Kim Stanley Robinson, Robert Kirkman, Joss Whedon, Ted Chiang, and Philip K. Dick. I ultimately argue that the totalizing thought experiments of science fiction have functioned as a laboratory of the mind for empire's proponents and detractors alike, offering a "view from outside" from which the course of history might be remapped and remade. As a result--far from occupying some literary periphery--I argue science fiction in fact plays a central role in political struggles over history, empire, identity, justice, and the future itself.