The Creation, Composition, Service and Settlement of Roman Auxiliary Units Raised on the Iberian Peninsula 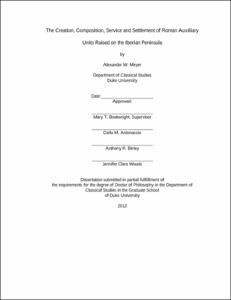 This dissertation is an epigraphic study of the Roman auxiliary units raised on the Iberian Peninsula based on a corpus of over 750 inscriptions. It presents the literary and epigraphic evidence for late Republican allied and auxiliary forces and for the structure of imperial auxiliary units. It then examines the recruiting practices of the auxilia, the settlement of veterans, and the evidence for the personal relationships of the soldiers enlisted in these units as they are recorded in the epigraphic record, including inscriptions on stone and military diplomas.

The evidence presented here reveals that recruitment from the units' home territories persisted throughout the Julio-Claudian period and coexisted with local, provincial and regional recruitment into the Flavian period. The findspots of inscriptions and diplomas related to veterans of these units indicate that only about half of these veterans remained within military communities after their discharge, while many retired to civilian communities, some of which were also the soldiers' places of birth. Finally, the evidence for personal relationships of men enrolled in these units demonstrates the relative importance of relationships between soldiers in the first century and the decline of recorded inter-soldier relationships in the second and third centuries, while evidence for relationships between soldiers and civilians is more frequent after the first century. These arguments lead to the conclusion that, throughout their service, individual soldiers were influenced by members of their home communities, fellow soldiers, and the native populations among which they served in varying degrees and that these soldiers had corresponding influence upon those communities.