Public Childhoods: Street Labor, Family, and the Politics of Progress in Peru 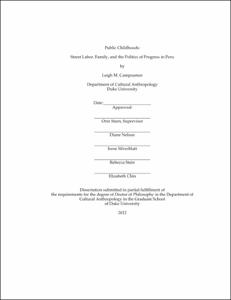 This dissertation focuses on the experiences of children who work the streets of Lima primarily as jugglers, musicians, and candy vendors. I explore how children's everyday lives are marked not only by the hardships typically associated with poverty, but also by their need to respond to the dominant notions of childhood, family roles, and urban order that make them into symbols of underdevelopment. In particular, I argue that transnational discourses about the perniciousness of child labor, articulated through development agencies, NGOs, the Peruvian state, the media, and everyday interpersonal exchanges, perpetuate an idea of childhood that not only fails to correspond to the realities of the children that I came to know, but that reinscribes a view of them and their families as impediments to progress and thus available for diverse forms of moral intervention. I ground my analysis in a notion that I call "public childhoods." This concept draws attention to the ways that subjectivities form through intersecting mechanisms of power, in this sense capturing nuances that common terms such as "street children" and "child laborer" gloss over. Children, I show, are a symbolic site for the articulation of the kinds of classed, raced and gendered differences that characterize Lima's contemporary urban imaginary. As they bear the embodied effects of such discourses, I argue, children who work the streets also participate - if in subtle ways - in these everyday ideological struggles into which they are drawn.

My dissertation is based on twenty-two months of fieldwork in Peru, in addition to several one- and two-month periods of preliminary and follow-up research. As an ethnographer, my research consisted primarily of accompanying children as they went about their daily routines. Beyond "hanging out" in their workspaces, which included a busy traffic intersection in an upper-middle class district and public buses, I also spent a great deal of time with the children's families, typically in their homes in Lima's shantytowns and working-class neighborhoods. I also attended meetings and otherwise participated in institutional spaces such as NGOs, social movements, Congressional hearings, and advocacy groups. Finally, in order to gain a more long-term perspective on discussions and policies involving childhood, I conducted research in Lima's historical archives.