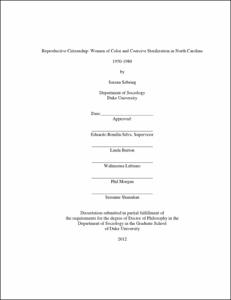 This dissertation develops an original theoretical framework of reproductive citizenship using an historical case study which explores the history of coercive sterilization of women of color in North Carolina between 1950-1980. It traces the ideological, political, economic, and social factors which led to a neo-eugenic sterilization campaign impacting over 3,000 women of color who were sterilized under state order. Data was drawn from historical sources including: the records of the North Carolina Eugenics Board, policy documents and statutes, trial records, articles in contemporary periodicals, manuscript records of social service providers and activist groups, and recorded statements of coercive sterilization survivors. The study employs two comparative historical methodological strategies: first, a time-period comparison contrasting the periods 1950-1964 and 1965-1980; and second, a group comparison highlighting the similarities and differences between Black and Native American women along three theoretically-significant dimensions. Group comparisons revealed important distinctions in: 1) how each group was framed within contemporary popular discourse regarding race, reproduction, and welfare provision; 2) the relationship of each group to the state welfare system in each of the aforementioned time periods; and 3) how each group was affected by the neo-eugenic sterilization campaign led by the North Carolina Eugenics Board. Over the course of the thirty-year time period examined, improvements in the quality and character of reproductive citizenship for women of color in North Carolina were indicated by: shifts in public and professional discourses concerning family planning and welfare provision; the implementation of policies and legislation protecting reproductive autonomy; and the dismantling of North Carolina's Eugenics Board, which had increasingly targeted poor, black women over time. Four key mechanisms supported these expansions of reproductive citizenship: 1) public outcry and judicial consideration of reproductive rights generated by a series of high-profile legal cases involving women of color seeking legal redress after experiencing coercive sterilization; 2) shifts in popular understanding and discursive frameworks led by emergent national coalitions of feminists and women of color advocating for reproductive and welfare rights; 3) increased political representation as more minorities, and women of color in particular, attained elected office as a result of the Voting Rights Act; and, 4) the implementation of state and federal policies protecting reproductive autonomy.