Investigating the Effects of Fantasy Proneness and Instructions to Fantasize 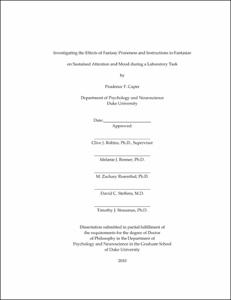 Fantasy prone individuals spend much of their time fantasizing, focusing on a rich internal world of imaginary people or stories, vivid memories, or dreams. Fantasy proneness has been linked to psychological distress and psychiatric disorders. However, few experimental studies have been conducted with fantasy prone individuals; therefore, little is known about the behavioral correlates of fantasy proneness. The current study investigated associations between self-reported fantasy proneness, as measured by a frequently used questionnaire, the CEQ, and behavior during a laboratory task of attention, the SART. A potential mood regulating function of fantasy also was explored. Results of the study support the assertion that fantasy proneness is associated with variations in behavior that can be observed in the context of the laboratory. Specifically, fantasy proneness correlated with fewer instances of on-task thought and more frequent instances of mind wandering without meta-awareness during the attention task. It also correlated with more task errors and higher levels of self-reported fantasy thought during the task (though not with higher levels of other types of off-task thought). Finally, fantasy thought was found to have a protective effect on positive affect during the mundane task. There was no relationship between fantasy thought and negative affect.