Does Mindfulness Affect Subsystems of Attention? 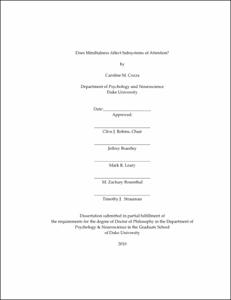 Attention is considered a fundamental component of mindfulness and current theory suggests that it is a primary mechanism of change that contributes to the substantive improvements in physical and psychological functioning attributed to mindfulness-based interventions including Mindfulness Based Stress Reduction (MBSR) and Mindfulness Based Cognitive Therapy (MBCT). Using the Attention Network Test (ANT) and an Inattentional Blindness (IB) task, the current study assessed differences in subsystems of attention in a group of experienced MBSR practitioners and a group of meditation naïve controls. MBSR practitioners demonstrated superior conflict monitoring performance relative to the control participants; however, groups did not differ with regards to their performance on the alerting and orienting components of the ANT. Additionally, although the MBSR practitioners were nearly half as likely as their control counterparts to evidence IB, this difference was not significant. Finally, self-reported mindfulness was higher in meditators relative to meditation naïve control participants, though scores did not correlate with performance on the attention tasks. The implications of these findings and directions for future research are discussed.