Utopian (Post)Colonies: Rewriting Race and Gender after the Haitian Revolution 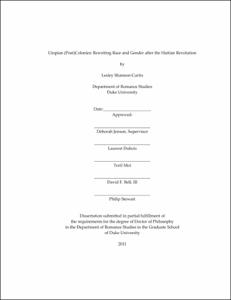 "Utopian (Post)Colonies: Rewriting Race and Gender after the Haitian Revolution" examines the works of French women authors writing from just before the first abolition of slavery in the French colonies in 1794 to those writing at the time of the second and final abolition in 1848. These women, each in different and evolving ways, challenged notions of race and gender that excluded French women from political debate and participation and kept Africans and their descendants in subordinated social positions. However, even after Haitian independence, French authors continued to understand the colony as a social and political enterprise to be remodeled and ameliorated rather than abandoned. These authors' rewritings of race and gender thus played a crucial role in a more general French engagement with the idea of the colony-as-utopia.

In 1791, at the very beginning of the Haitian Revolution--which was also the beginning of France's unexpected first postcolonial moment--colonial reform, abolitionism, and women's political participation were all passionately debated issues among French revolutionaries. These debates faded in intensity as the nineteenth century progressed. Slavery, though officially abolished in 1794, was reestablished in 1802. Divorce was again made illegal in 1816. Even in 1848, when all men were granted suffrage and slavery was definitively abolished in the French colonies, women were not given the right to vote. Yet, throughout the early nineteenth century, the notion of the colony-as-utopia continued to offer a space for French women authors to imagine gender equality and women's empowerment through their attempts to alter racial hierarchy.

My first chapter examines the development of abolitionism through theatre in the writings of Olympe de Gouges (1748-1793). At a time when performance was understood to have influential moral implications, de Gouges imagines a utopian colony to be possible through the power of performance to produce moral action. In my second chapter, I analyze how, during the slowly re-emerging abolitionist movements of the 1820s, Sophie Doin (1800-1846) and Marceline Desbordes-Valmore (1786-1859) expose the individual emotional suffering of slaves in an effort to make the violence of enslavement visible. In the process of making this violence visible, Doin's <italic>La Famille noire suivie de trois nouvelles blanches et noires</italic> (1825-6) and Desbordes-Valmore's <italic>Sarah</italic> (1821), in contrast with Claire de Duras's <italic>Ourika</italic> (1823), mobilize respect for motherhood to bolster their abolitionist claims. My third chapter analyzes the colonial novels of Madame Charles Reybaud (1802-1870), a forgotten but once-popular novelist, who uses the idea of the colony to develop a feminist re-definition of marriage involving the emancipation of males from their own categories of enslavement. Influenced by the Saint-Simonian thought of the July Monarchy, Reybaud imagines a utopian colony organized by a feminized French humanitarianism that attempts to separate French racial identity from that of the "Creole" colonizer. My final chapter compares this French desire to yoke utopia to colony with nineteenth-century Haitian attempts to reveal the opposite synergy: the inseparability of the institutions of slavery and colonialism. Haiti's first novel, <italic>Stella</italic> (1859) by Émeric Bergeaud (1818-1858), opposes racial hierarchy and defends Haitian independence in the face of harsh discrimination from an international community whose economies still depended on colonialism and slavery. In contrast with the previous texts studied in this dissertation, <italic>Stella</italic> imagines Haiti to have the potential to become a utopian postcolony, a nation freed from the constraints of colonialism in such a way as to serve as a model for a future in which racial hierarchy has no power.