Bycatch and foraging ecology of sea turtles in the Eastern Pacific 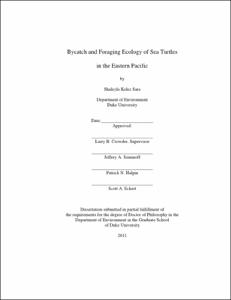 Sea turtles are long lived marine species that are currently endangered because their life history and population dynamics hinder them from withstanding modern anthropogenic threats. Worldwide, fisheries bycatch in on the major threats to the survival of sea turtles and that is also the case in the Eastern Pacific. To establish regional conservation priorities for the mitigation of bycatch, it is essential to first obtain a comprehensive picture of the regional sea turtle bycatch situation. This comprehensive analysis was lacking for the Eastern Pacific; therefore one component of this dissertation (the first chapter) is focused on delivering a regional bycatch analysis for the Eastern Pacific. A literature review was conducted to obtain numbers of turtles captured, frequencies, bycatch and mortality rates per species and country in trawl, longline, and gillnet fisheries, and to compile results of mitigation measures. Moreover, estimates for current annual capture rates in trawl fisheries were obtained and compared with population numbers.

This regional bycatch used all the information compiled and synthesized to give conservation priorities at the regional level. The review underlines the high bycatch rates in trawls for Costa Rica, Guatemala, and El Salvador and the detrimental impact that these captures could have specially for hawksbill Eretmochelys imbricata due to its reduced population numbers and for green turtle Chelonia mydas due to its highest mortality rate. It also emphasizes the continuous lack of use of TEDs as a bycatch mitigation measure. In longline fisheries, the review identifies the high bycatch rates in pelagic longline fisheries of Costa Rica, Ecuador, and Nicaragua in a global context but given that olive ridley Lepidochelys olivacea is the most common species captured in these countries, it highlights the capture of loggerhead Caretta caretta and leatherback Dermochelys coriacea off Peru and Chile due to their small population numbers. Bottom longlines have high mortality rates compared with pelagic longlines in the region and the review identifies a need for further research in this area due to the scarce information but high mortality rates. The review also noted that some mitigation measures for pelagic longlines like circle hooks and hooks with appendages could bring improvements in the mitigation of bycatch in longline fisheries in the region, there is still considerable work to be done in technology transfer, sea turtle handling, and estimates of post-release mortality rates.

For gillnet fisheries, the most important highlight is how little information exists for the region given the high rates of bycatch for sea turtles in this gear. However, the difficulties of studying bycatch in highly dynamic and artisanal fisheries are recognized as the major impediment for this situation. Nevertheless, the high bycatch rates in areas where sea turtles congregate in high numbers like in foraging grounds for loggerhead in Baja California, Mexico and for greens in Paracas and Sechura, Peru, calls for either gear modifications (which has not been that successful), change of gear, or areas closed for gillnets.

The second half of the dissertation is focused on foraging ecology of oceanic sea turtles in the Southeast Pacific Ocean. Sea turtles in the oceanic stage are the least known stage due to the difficulty of accessing these individuals. However, it is a very important stage in the life cycle and can be critical for the population dynamics of sea turtles as some population models have shown. Therefore, this dissertation is filling a gap in the life cycle of sea turtle populations in the Eastern Pacific.

To study foraging ecology, we used Stable Isotope Analysis (SIA) of turtle tissues as well as potential prey items from the oceanic realm. SIA is a great tool because it gives an integrated view, from days to weeks, of prey from a consumer tissue. SIA also can be used to link consumers to habitats when elements that have spatial trends are used. In chapter two, we investigate the foraging ecology of three species of sea turtles to compare trophic status and to observe if spatial patterns were shown in the SIA signatures of sea turtles. To our knowledge this is the first study employing SIA to research the ecology of three species of sea turtles from the same time and space. Our results show that spatial patterns in delta15N and delta13C were observed in sea turtle's tissues as correlations with latitude. We also found that loggerhead's signatures differed significantly from green and olive ridleys, especially in terms of delta15N. Loggerheads had higher values of delta15N and also a wider nitrogen trophic niche. Greens and olive ridleys were similar in isotopic nitrogen values but they were significantly different in carbon. When analyzing a smaller group of animals captured in a more restricted area, nitrogen differences were not found which suggests that latitudinal spatial patterns play an important role in the nitrogen signature. On the contrary, carbon signatures still differed among turtles in the restricted area which suggest that the inshore-offshore trend is strong and made us conclude that loggerheads are restricted to oceanic areas but that greens and olive ridleys could be using both coastal and oceanic areas.

In chapter three, we conduct a mixing model analysis using the Bayesian program SIAR to identify the most important prey items for green, olive ridley, and loggerhead off Peru. Also, we wanted to identify the contribution of longline baits in the diet of oceanic turtles. The analysis was restricted to the central zone of our study area to avoid spatial trends in nitrogen. To use as sources in the model, we collected potential prey items offshore Peru during trips on longline fishing vessels and obtained their stable isotope signatures. Results from our mixing models show that for greens and olive ridleys, crustaceans, mollusks, and coastal Ulva (indicator of coastal prey) were the only important food items. In the case of greens, crustaceans had a very high proportional contribution and due to the fact that nitrogen values of crustaceans were the lowest ones among the sources it seems that greens would be eating in a lower trophic level. The importance of coastal Ulva for greens and olive ridleys is a confirmation of our findings from chapter two where we suggest that these two species could be using oceanic as well as coastal areas.

Results for loggerheads showed cnidarians, mollusks, mackerel and squid bait as foraging items and highlights the differences among this species and the other two. The lack of importance of coastal Ulva again suggests that loggerheads remain only in oceanic areas off Peru. Moreover, the importance of mackerel and squid, the most common longline baits, suggests this species is the one interacting the most with longline fisheries and that cumulative effect of multiple interactions could have a detrimental effect in this population.