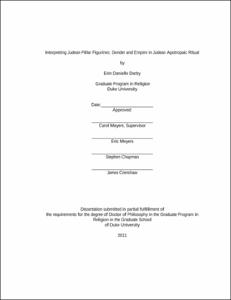 This dissertation investigates Iron II Judean pillar figurines and their place in Judean ritual. First, the project identifies major trends in the interpretation of figurines and evaluates them using ancient Near Easter texts, archaeological context, the Hebrew Bible, and iconography. Second, it focuses on the significance of major iconographic shifts in figurine production, using the various types of data to understand these shifts and their implications for figurine function.

The dissertation first analyzes four major trends in the study of these statuettes, showing that interpreters begin with assumptions based upon figurine iconography and only then take into account Israelite religion, biblical texts, and archaeology (Chapter 2). The study then explores textual descriptions of figurine rituals from the Neo-Assyrian Empire. These suggest that figurine rituals were highly complex and that the absence of accompanying ritual texts is a barrier to interpretation (Chapter 3).

Chapters 4-7 examine the archaeological contexts and technological characteristics of the figurines. Chapter 4 focuses on Kathleen Kenyon's excavations in Jerusalem, Chapter 5 focuses on Yigal Shiloh's excavations in the same area, Chapter 6 describes the results of a new petrographic study of Jerusalem figurines, and Chapter 7 summarizes the data and compares them with the archaeological contexts of figurines found in other areas of Judah. The analysis demonstrates that the majority of figurines were found as random trash in domestic structures, that figurines were used by people from various socio-economic levels, that most figurines were not associated with domestic shrines, and that figurines have no significant correlation with artifacts associated with women's activity areas. The data also have important implications for the understanding of iconography in Jerusalem and surrounding areas.

Turning to the Hebrew Bible, Chapter 8 explores the descriptions of clay objects and idol production in biblical texts. This survey of passages shows that production from clay was never prohibited in the biblical text and that concerns over the production of idols focus on images from stone, wood, and metal. It also demonstrates that clay, as a production material, had a unique ability to bridge the gap between sacred and profane realms.

Chapter 9 investigates the various components of the figurines through stylistic analysis and comparative iconography. The chapter argues that the figurines were probably associated with protection and healing. It also discusses the rise of the pillar figurine style in Judah and Jerusalem, the significance of its regional adaptation, and the importance of the image's ambiguity for its function and dissemination.

Finally, Chapter 10 locates the figurines in their socio-historic context within Iron II Judah, as a part of the Neo-Assyrian Empire. The chapter evaluates the likelihood that the Neo-Assyrian Empire provided the cultural context for the spread of figurine rituals associated with healing and protection in the Iron II. It also summarizes biblical depictions of healing rituals and the role of divine intermediaries, closing with a final evaluation of the dominant interpretive paradigms and a summary of figurine development and function.