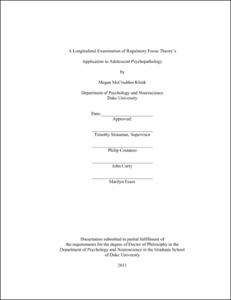 Higgins' regulatory focus theory (1997) postulates two cognitive/motivational systems for pursuing desired end states: the promotion and prevention systems. The theory predicts that failure in each system is discriminantly associated with dysphoric and anxious affect respectively; and that significant failure in these systems creates vulnerability to depression and anxiety. This study tested these hypotheses among adolescents who took part in the longitudinal Wisconsin Study of Families and Work. We found partial support for the theory's predictions. Specifically, the original adult Selves Questionnaire (SQ), which was administered at age 13, did not demonstrate the expected discriminant associations with dysphoric and anxious affect and symptoms. However, the Selves Questionnaire - Adolescent Version, which was administered at age 15, yielded partial support for the theory. Ideal self-discrepancy was discriminantly associated with depressive affect but ought self-discrepancy was not discriminantly associated with anxious affect. However, feared self-discrepancy was discriminantly associated with anxious affect, which adds to the literature suggesting that feared self-discrepancy might be a better construct to use in measuring prevention failure among adolescents. The association between self-discrepancy and affect was found cross-sectionally but not longitudinally. The study also tested recently formulated predictions of regulatory focus theory which state that significant failure in one regulatory system is likely to negatively impact the other system (Klenk, Strauman, & Higgins, 2011). No support for this prediction was found. Implications of the findings, and aspects of the study that may have reduced our ability to test the hypotheses of interest, are discussed.