The Influence of Emotion on the Neural Correlates of Episodic Memory: Linking Encoding, Consolidation, and Retrieval Processes 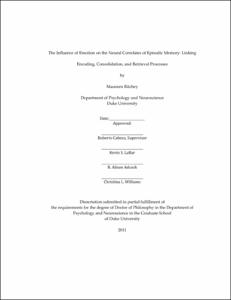 Emotion is known to influence multiple aspects of memory formation, which may include the initial encoding of the memory trace, its consolidation over time, and the efficacy of its retrieval. However, prior investigations have tended to treat emotional modulation of episodic memory as a unitary construct, thus conflating the contributions of these different stages to emotion-mediated memory enhancements. The present thesis aims to disentangle the component processes of emotional memory formation and retrieval through a series of studies using cognitive behavioral and functional magnetic resonance imaging (fMRI) methods. In the first 2 studies, neural activity was evaluated during the initial viewing of emotionally arousing and neutral scenes and, in the 3rd study, neural activity during this initial viewing period was compared to that during a recognition memory task. The findings are compatible with the proposal that two distinct networks support successful emotional memory formation: an amygdala-medial temporal lobe (MTL) network that modulates the consolidation of memories over time and a prefrontal-MTL network that translates emotion effects on controlled elaboration into superior memory encoding. The superlative quality of emotional memories is furthermore marked by heightened similarity between neural states at encoding and retrieval, suggesting another line of evidence through which emotion effects can be observed. Taken together, the results presented here highlight the heterogeneity of processes that confer mnemonic advantages to emotionally significant information.