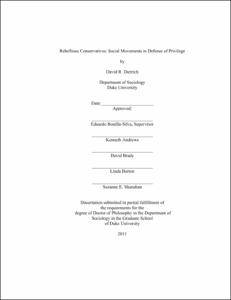 The first decade of the 21st century in the United States has seen the emergence of a number of protest movements based upon politically conservative ideas, including opposition to affirmative action, undocumented migration, and national health care, among others. Conservative social movement organizations like the Minutemen and the Tea Party have had enormous influence over American politics and society. Conservative movements such as these present challenges to existing ways of thinking about social movements. Most social movement research has centered on so-called progressive movements, like the Civil Rights Movement, which are assumed to be organized by an oppressed population fighting for rights they have been denied historically. However, conservative movements do not appear to involve an oppressed population fighting for rights denied to them. It seems that actually the reverse may be true: conservative protesters tend to be members of privileged populations in contrast to oppressed. But if conservative protesters tend to be privileged instead of oppressed, why then are they protesting? What are their goals?

To fully answer these questions, we must look beyond existing social movement theory. The purpose of my research is to extend social movement theory, particularly Rory McVeigh's theory of power devaluation by using Blumer's theory of racial group position and Bourdieu's conceptualization of capital to explore the motivations of conservative movements and how they construct movement ideologies. This research explores the goals and ideology of two conservative movements, the anti-illegal immigration movement and the anti-abortion/pro-life movement. To examine these movements, I first performed an ethnographic content analysis of over 1000 articles and posts from movement organization web pages. Second, I conducted nearly fifty semi-structured interviews with movement leaders and participants. Finally, I examined over twenty hours of speeches given at rallies and protest events.

Consistent with McVeigh's power devaluation theory and Blumer's theory of group position, I found that these conservative activists are motivated by perceived threats to privileges claimed as proprietary rights by their movement groups. Anti-illegal immigration groups perceive threats to existing privileges associated with employment, social services, citizenship, and cultural issues such as language, while anti-abortion groups cite threats to American morality. Furthermore, these groups make proprietary claims to these privileges based upon restrictive identity formations. While anti-illegal immigration activists identify as "American," they constrain who qualifies as an American based upon factors such as language spoken, cultural behaviors, and citizenship of parents. Similarly, anti-abortion/pro-life activists identify as "Christian," but exclude many who would be identified as Christian in the broader population based upon criteria including opposition to abortion and sexual preference. They also claim American is a Christian nation. Following Blumer's group position theory, I also analyzed those individuals from which these groups feel threatened: migrants crossing the border without documentation and women who get abortions. I found that conservative activists portrayed these individuals in terms of perpetrators and victims, providing only mixed support for group position. Finally, I examined the goals of anti-illegal immigration and anti-abortion/pro-life organizations specifically looking at non-policy-oriented goals. Anti-abortion/pro-life organizations emphasize changing American culture as much or, in many cases, more than changing laws. While most anti-illegal immigration organizations stress education as a goal, whether this is for the purposes of policy change or cultural change is unclear.