CaMKK2 Contributes to the Regulation of Energy Balance 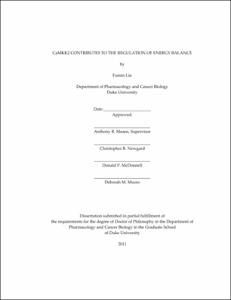 The incidence of obesity and associated diseases such as type 2-diabetes and hypertension has reached epidemic portions worldwide and attracted increased interest to understand the mechanisms that are responsible for these diseases. Obesity can result from excessive energy intake, and increasing evidence has emphasized the role of the central nervous system, especially the hypothalamus, in regulating food intake. White adipose, as a direct target of obesity and an important endocrine organ, also has long been a subject of scientific inquiry. AMPK, a conserved energy sensor, has been shown to play important roles in both the hypothalamus and adipose. Recently, CaMKK2 was shown to function as an AMPK kinase. I used intracerebroventricular cannulation as a means to acutely inhibit hypothalamic CaMKK2 with STO-609 and characterize the appetite change associated with loss of CaMKK2 function. Infusion of STO-609 in wild-type mice, but not CaMKK2-null mice, inhibited appetite and promoted weight loss consistent with reduced NPY and AgRP mRNA. Furthermore, intraperitoneal injection of ghrelin increased food intake in wild-type but not CaMKK2-null mice, and 2-DG increased appetite in both types of mice, indicating that CaMKK2 functions downstream of ghrelin to activate AMPK and upregulate appetite. As CaMKK2-null mice were protected from high-fat diet-induced obesity and diabetes, I performed a pair feeding experiment using a high-fat diet and demonstrated that protection of CaMKK2-null mice did not require reduced food consumption. Analysis of brown adipose tissue and metabolic analysis indicated that CaMKK2-null mice did not expend more energy than WT mice. Interestingly, we were surprised to find that CaMKK2-null mice had more adipose than wild-type mice when fed standard chow (5001). By real-time PCR and immunoblot, I identified CaMKK2 expression in preadipocytes and showed that it decreased during adipogenesis. I used STO-609 or shRNA to block CaMKK2 activity in preadipocytes, which resulted in enhanced adipogenesis and increased mRNA of adipogenic genes. I also identified AMPK as the relevant downstream target of CaMKK2 involved in inhibiting adipogenesis via a pathway that maintained Pref-1 mRNA. Consistent with the in vitro data, we further demonstrated that CaMKK2-null mice have more adipocytes but fewer preadipocytes, which supports our hypothesis that loss of CaMKK2 enhances adipogenesis by depleting the preadipocyte pool. Together the data presented herein contribute to our understanding of distinct mechanisms by which CaMKK2 contributes to feeding behavior and adipogenesis.