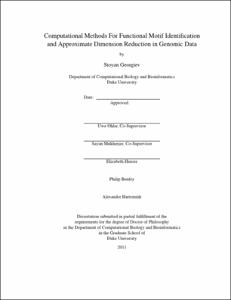 Uncovering the DNA regulatory logic in complex organisms has been one of the important goals of modern biology in the post-genomic era. The sequencing of multiple genomes in combination with the advent of DNA microarrays and, more recently, of massively parallel high-throughput sequencing technologies has made possible the adoption of a global perspective to the inference of the regulatory rules governing the context-specific interpretation of the genetic code that complements the more focused classical experimental approaches. Extracting useful information and managing the complexity resulting from the sheer volume and the high-dimensionality of the data produced by these genomic assays has emerged as a major challenge which we attempt to address in this work by developing computational methods and tools, specifically designed for the study of the gene regulatory processes in this new global genomic context.

First, we focus on the genome-wide discovery of physical interactions between regulatory sequence regions and their cognate proteins at both the DNA and RNA level. We present a motif analysis framework that leverages the genome-wide

evidence for sequence-specific interactions between trans-acting factors and their preferred cis-acting regulatory regions. The utility of the proposed framework is demonstarted on DNA and RNA cross-linking high-throughput data.

A second goal of this thesis is the development of scalable approaches to dimension reduction based on spectral decomposition and their application to the study of population structure in massive high-dimensional genetic data sets. We have developed computational tools and have performed theoretical and empirical analyses of their statistical properties with particular emphasis on the analysis of the individual genetic variation measured by Single Nucleotide Polymorphism (SNP) microrarrays.