Lord, Teach Us How to Grieve: Jesus' Laments and Christian Hope 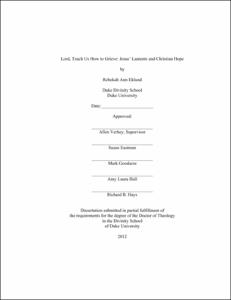 This dissertation studies the role and function of lament in the New Testament. It addresses the problem that lament does not seem to be a pervasive feature of the New Testament, particularly when viewed in relation to the Old Testament. In some cases the voice of lament appears subdued or muted altogether in favor of resurrection hope and endurance in suffering. I argue that a careful investigation of the New Testament reveals that it thoroughly incorporates the pattern of Old Testament lament into its proclamation of the gospel, especially in the person of Jesus Christ as he both prays and embodies lament. Jesus represents God's answer to Israel's long-prayed cries of lament, but he also takes up the prayer of lament as a human being; as the Messiah-King, high priest, and prophet of Israel; and as the divine Son of God. Because of this, lament has a dual function in the New Testament: it points to Jesus as the beginning of the fulfillment of lament's cries, and it points forward to the consummation of God's kingdom as guaranteed in Jesus' resurrection. My working definition of lament in the New Testament derives from the Old Testament pattern: lament is a persistent cry for salvation to the God who promises to save, in a situation of suffering or sin, in the confident hope that this God hears and responds to cries, and acts now and in the future to make whole. Lament calls upon God to be true to God's own character and to keep God's own promises, with respect to humanity, Israel, and the church. Although lament texts occur throughout the New Testament--in the Gospels, the epistles, and Revelation--they cluster predominantly in the Gospels, especially in the passion narrative. Therefore, I focus first on the significance of Jesus' laments in the Gospel passion narratives. I discuss the role of lament in all four passion narratives, and then I read these same texts through the lenses of Jesus' humanity, Jesus' messianic identity, and Jesus' divinity. Finally, in the light of this investigation, I consider lament as a prayer of eschatological longing for the kingdom inaugurated by Jesus' death and resurrection.