Presidential Preparation: The Influence of Military Service on the Management Styles and Policy Decisions of U.S. Presidents 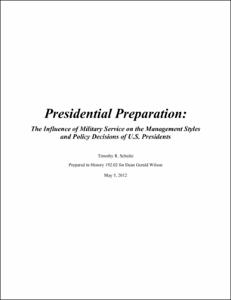 View / Download
623.3 Kb
Date
Author
Schulte, Timothy
Repository Usage Stats
450
views
806
downloads
Abstract
People are shaped by their backgrounds, and military service is arguably one of the most impactful experiences in which one can partake. Thirty-one of America's forty-three different presidents have served in the armed forces (twenty-one having seen combat). Like all other veterans, the service of these men impacted the rest of their lives — the decisions they made; the ways they interacted with others; and their views of America, its allies, and its enemies. Through critical analysis of the Public Papers of the Presidents, memos, letters, and personal reflections, along with the support of secondary sources, the impact of military service on the management styles and policy decisions of United States presidents becomes evident. The following American presidents are used to frame the analysis: - Dwight D. Eisenhower, a career soldier who rose to the top of the Army's hierarchy - John F. Kennedy, a Naval lieutenant who served valiantly for less than four years - William J. Clinton, an academic and career politician who actively avoided military service By exploring how the styles and decisions of these men are the product of their pre-presidential training, the unique effects of military service on those who served in the Oval Office is made clear. At a deeper level, distinguishing characteristics of military service — such as rank achieved, length of service, and combat experience — are addressed when relevant. The study identifies connections between the priorities, politics, and decision-making techniques of the presidents who were members of the nation's armed forces, and it compares these trends to the presidency of one who did not serve in the military.
Description
Durden Prize finalist. Prepared for Dean Gerald Wilson in History 192.02 in the spring of 2012.
Type
Course paper
Department
History
Subject
Kennedy
Clinton
Eisenhower
Military
American History
Permalink
https://hdl.handle.net/10161/5750
Citation
Schulte, Timothy (2012). Presidential Preparation: The Influence of Military Service on the Management Styles and Policy Decisions of U.S. Presidents. Course paper, Duke University. Retrieved from https://hdl.handle.net/10161/5750.
Collections
More Info
Show full item record