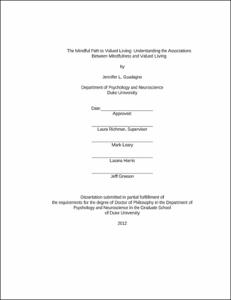 When behavior is directed toward activities, people, and experiences that people find most important in their lives, they are engaged in valued living. Given that valued living is associated with well-being, quality of life, and happiness, understanding ways in which value-concordant behavior can be promoted, enhanced, and maintained is of utmost importance. Two studies sought to examine the associations between mindfulness--as a dispositional trait and as developed through training--and valued living. In Study 1 dispositional mindfulness was strongly related to three aspects of valued living: the general tendency for people to understand their values and act in value-consistent ways; directing behavior toward valued activities; and clarity of, action toward, and feelings of success and satisfaction with action toward specific important values. Study 2 compared valued living scores of people participating in a Mindfulness Based Stress Reduction (MBSR) program to a control group. Mindfulness training was related to increased general valuing processes and value-relevant behavior but was not related to increased clarity of, action, or success or satisfaction with action toward specific values.