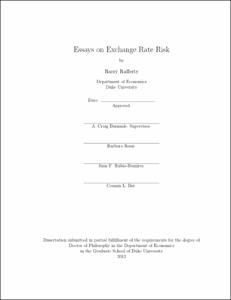 This dissertation is a collection of papers with the unifying objective being to better understand crash risk in foreign exchange markets. I investigate how exposure to the risk of currency crashes is able to provide a unified rationalization of the returns of various sorted currency portfolios.

In the first chapter, I identify an aggregate global currency skewness risk factor, which I denote SKEW. Currency portfolios that have higher average excess returns covary more positively with this risk factor. They suffer losses in times when high interest rate investment currencies have a greater tendency to depreciate sharply as a group relative to low interest rate funding currencies. Consequently, they earn higher average excess returns as reward for exposure to this risk. I create three sets of sorted currency portfolios reflecting three distinct sources of variation in average excess currency returns. The first set sorts currencies based on interest rate differentials. The second set sorts currencies based on currency momentum. The third set sorts currencies based on currency undervaluedness relative to purchasing power power parity (PPP) implied exchange rates. I find that differences in exposure to the global currency skewness risk factor can explain the systematic variation in average excess currency returns within all three groups of portfolios much better than existing foreign exchange risk factors in the literature.

In the second chapter, I build on the first chapter by studying the extent to which currency crash risk is predictable or unpredictable and whether the pricing power of aggregate currency skewness, uncovered in the first chapter, is due to unpredictable or predictable crash risk. Focusing on currency crash risk proxied using realized currency skewness at both the individual currency level and at the aggregate level using the SKEW risk factor introduced in the first chapter, I investigate whether either form of crash risk is predictable using only past information about crash risk. In particular, I use past information on both individual currency level and aggregate level measures based on both lagged realized currency skewness and lagged option implied risk neutral skewness. I find evidence that there is not much predictability at the individual country level or at the aggregate level over the full sample period considered. However, there is some evidence of predictability at the aggregate level since 1999, and especially so when option implied risk neutral skewness measures are used. Additionally, I use the predictions of SKEW and conduct asset pricing similar to that in chapter 1 using predicted and unpredicted SKEW to see whether its pricing power comes from predictable or unpredictable components. I find evidence that it is unpredictable currency crash risk that is very important, as the asset pricing results are largely identical when either SKEW or SKEW forecast errors are used. and whether the pricing power of