Regulation of the Apoptosome in Cancer 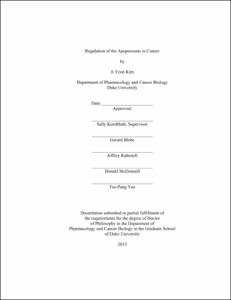 Apoptosis is a cellular suicide program that can be initiated by various genotoxic and cytotoxic stimuli. In many cases, such cell damaging agents promote cell death through the intrinsic apoptotic pathway by triggering mitochondrial cytochrome <italic>c</italic> release and subsequent caspase activation. Cytosolic cytochrome <italic>c</italic> is directly responsible for initiating formation of the caspase-activating apoptosome, which plays a crucial role in the apoptotic process. Given the importance of cellular fate, apoptosis is tightly controlled by a balance between survival and death signals. It has been shown that activated cell survival pathways, including the mitogen-activated protein kinase (MAPK) cascade and the PI3K/Akt signaling, enhance cell viability by conferring resistance to apoptotic cell death. However, the underlying mechanism(s) that lead to inhibition of functional apoptosome formation (and caspase activation) has yet to be elucidated. In the studies that are described in this dissertation, I have investigated the regulation of apoptosis downstream of mitochondrial cytochrome <italic>c</italic> release with the goal of understanding how survival signaling can alter the apoptotic program, contributing to human malignancies.

In the second part, we examine how apoptosis is inhibited by oncogenic tyrosine kinase signaling by using leukemogenic tyrosine kinase-induced leukemia model systems. We have demonstrated that protein phosphatase 5 (PP5) is responsible for Hsp90&beta; hypophosphorylation, which can contribute to impaired cell death in leukemia expressing oncogenic tyrosine kinases. Loss of PP5 results in an increase of Hsp90&beta; phosphorylation, raising leukemic cells' responsiveness to imatinib, a BCR-ABL kinase inhibitor. Further we have discovered that acetylation regulates PP5 activity on Hsp90&beta;. Mutational study showed that K144 acetylation on PP5, which was diminished in leukemic conditions, inhibited PP5 binding to Hsp90&beta;, causing Hsp90&beta; hyperphosphorylation and subsequently potentiating cells to apoptosis. These studies reveal a molecular mechanism by which agents enhancing PP5 acetylation may be a potential treatment for leukemias. Collectively, this work provides new insight into mechanisms of regulation of apoptosome formation/function, helping us understand how the evasion of apoptotic cell death contributes to cancer cell survival. Further, this finding implicates cytochrome <italic>c</italic>-induced apoptotic signaling in the context of cancer cell responsiveness to chemotherapeutic treatments.