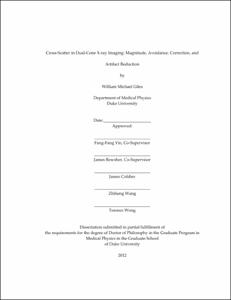 Onboard cone beam computed tomography (CBCT) has become a widespread means of three-dimensional target localization for radiation therapy; however, it is susceptible to metal artifacts and beam-hardening artifacts that can hinder visualization of low contrast anatomy. Dual-CBCT provides easy access to techniques that may reduces such artifacts. Additionally, dual-CBCT can decrease imaging time and provide simultaneous orthogonal projections which may also be useful for fast target localization. However, dual-CBCT will suffer from large increases in scattered radiation due to the addition of the second source.

An experimental bench top dual CBCT system was constructed so that each imaging chain in the dual CBCT system mimics the geometry of gantry-mounted CBCT systems commonly used in the radiation therapy room. The two systems share a common axis of rotation and are mounted orthogonally. Custom control software was developed to ensure reproducible exposure and rotation timings. This software allows the implementation of the acquisition sequences required for the cross scatter avoidance and correction strategies studied.

Utilizing the experimental dual CBCT system cross scatter was characterized from 70-145 kVp in projections and reconstructed images using this system and three cylindrical phantoms (15cm, 20cm, and 30cm) with a common Catphan core. A novel strategy for avoiding cross-scatter in dual-CBCT was developed that utilized interleaved data acquisition on each imaging chain. Contrast and contrast-to-noise-ratio were measured in reconstructions to evaluate the effectiveness of this strategy to avoid the effects of cross scatter.

The effectiveness of the correction techniques were evaluated by measuring the contrast and contrast-to-noise-ratio in an image quality phantom. Additionally, the effect of the high-frequency correction on resolution was measured using a line pair phantom.

Cross scatter in dual CBCT was shown for large phantoms to be much higher than forward scatter which has long been known to be one of the largest degrading factors of image quality in CBCT. This results in large losses of contrast and CNR in reconstructed images. The interleaving strategy for avoiding cross scatter during projection acquisition showed similar performance to cross scatter free acquisitions, however, does not acquire projections at the maximum possible rate. For those applications in which maximizing the acquisition rate of projections is important, the low- and high-frequency corrections effectively mitigated the effects of cross scatter in the dual CBCT system.