Essays in Health, Education and Development 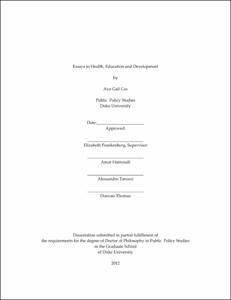 This dissertation encompasses three essays that examine the extent to which parental loss and social programs affect the health, education and time allocation of children in developing countries.

The first chapter asks the question of whether early life public health interventions have lasting or long term impact on children's human capital development. In order to answer this question, this chapter investigates the long term impact of the safe motherhood program in Indonesia on later cognition and schooling outcomes of children when they are age 11 to 17 years. The paper further investigates this question by examining the impact of the program based on exposure that began during a particular year. The findings suggest that the safe motherhood program had an impact on adolescent cognition and schooling. In particular, the program impact is relatively large and significant for those children who began exposure to the program at age 2 or younger, or not yet conceived. These estimates are robust to a series of robustness and specification checks. The results are also in general consistent with the findings in biological literature that suggest the importance of the first two years of life in shaping outcomes later in life.

The second chapter examines the question of how parental loss or absence affects child well-being. While the strategy of many papers in the literature is to use parental death due to HIV/Aids to examine this question, this chapter uses the 2004 Indian Ocean tsunami as a plausibly exogenous source of variation in parental death. In addition, the paper uses a unique longitudinal dataset that has baseline information on the same sample of individuals interviewed after the tsunami. Also, given rich data, the paper is able to look at various dimensions of child well-being which include school attendance, post-secondary aspirations, time allocation as well as educational attainment and marriage decisions for older children. The paper provides an in-depth analysis by examining the impact of parental death by age and gender of the child as well as looking at the impact in the short term and longer term. The results suggest that death of both parents, which has been little explored in the literature, has a large, negative impact on the human capital accumulation of both males and females. The loss of father alone led older males (aged 15 to 17 at the time of tsunami) to acquire less education compared to same age males whose both parents survived, while no effect is found on younger males aged 9 to 14. Furthermore, the results suggest that maternal death has little impact on schooling outcomes but does affect time allocation of children.

Finally, the third chapter examines the impact of a unique bilateral grant-aid program which provided typhoon-resistant schools and instructional equipment to the Philippines. The results suggest that the presence of both the typhoon-resistant schools and instructional equipment programs had a positive impact on the educational attainment of both men and women. The availability of instructional equipment program alone also increased the educational attainment of men but it does not seem to have had substantive effect on women. On the other hand, the availability of typhoon-resistant schools without the instructional equipment package did not have any impact on schooling outcomes of either the males or females. Except for the falsification exercise which suggests that there could be other underlying trends which may not be fully captured by the specifications, the estimates are in general robust to the inclusion of individual level characteristics, accounting of other concurrent national government's programs, restricting to municipalities in the typhoon belt region and accounting for municipality-specific trends. The findings suggest the importance of not only expanding access to schooling through increased availability of schools or classrooms (particularly, those that are resistant to natural disasters) but also the importance of improving the quality of learning through the availability of school resources that aide in students' learning in developing countries.