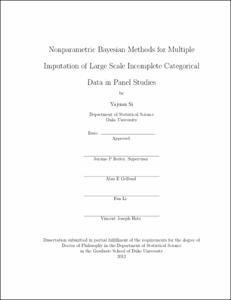 The first contribution is a fully Bayesian, joint modeling approach of multiple imputation for categorical data based on Dirichlet process mixtures of multinomial distributions. The approach automatically models complex dependencies while being computationally expedient.

I illustrate repeated sampling properties of the approach

using simulated data. This approach offers better performance than default chained equations methods, which are often used in such settings. I apply the methodology to impute missing background data in the 2007 Trends in International Mathematics and Science Study.

For the second contribution, I extend the nonparametric Bayesian imputation engine to consider a mix of potentially non-ignorable attrition and ignorable item nonresponse in multiple wave panel studies. Ignoring the attrition in models for panel data can result in biased inference if the reason for attrition is systematic and related to the missing values. Panel data alone cannot estimate the attrition effect without untestable assumptions about the missing data mechanism. Refreshment samples offer an extra data source that can be utilized to estimate the attrition effect while reducing reliance on strong assumptions of the missing data mechanism.

I consider two novel Bayesian approaches to handle the attrition and item non-response simultaneously under multiple imputation in a two wave panel with one refreshment sample when the variables involved are categorical and high dimensional.

First, I present a semi-parametric selection model that includes an additive non-ignorable attrition model with main effects of all variables, including demographic variables and outcome measures in wave 1 and wave 2. The survey variables are modeled jointly using Bayesian mixture of multinomial distributions. I develop the posterior computation algorithms for the semi-parametric selection model under different prior choices for the regression coefficients in the attrition model.

I show via simulation studies that the pattern mixture models can recover true parameter estimates, even when inferences based on the panel alone are biased from attrition.

I apply both the selection and pattern mixture models to data from the 2007-2008 Associated Press/Yahoo News election panel study.