Parent and Provider Decision-Making for Infants with HIE 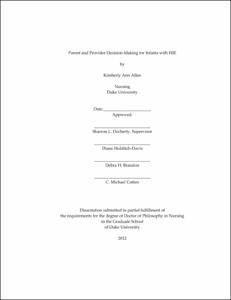 Hypoxic ischemic encephalopathy (HIE) is a serious birth complication of full term infants; 40-60% of affected infants die by 2 years or have severe disabilities. Infants with HIE often have a normal gestation and parents anticipate a healthy birth. HIE can be managed with aggressively with moderate hypothermia < 6 hours of life, cardiopulmonary support, and seizure management. Experimental interventions such as moderate hypothermia > 6 hours of life and umbilical cord stem cell transplant are also available. Additional decision-making for these infants may include long-term developmental therapy, nutritional support, and respiratory support. However, who makes these decisions, what factors influence decision-making and the long-term impact of decision-making on parents and health care providers remains unknown. Therefore, the purpose of this study was to explore parental and health care provider decision-making for infants with HIE.

A longitudinal case study design was used to study 11 cases of infants with HIE. Each case included the infant, the parent, and the infant's providers. Infant medical record data, interviews and questionnaires were used to collect data from infant birth through 6 months of age. Content analysis was used to analyze the interviews. Descriptive statistics were used with the questionnaires. Visualization techniques were used to search for patterns and trends in the assembled data.

Parents were concerned about the short and long-term impact of HIE, few parents understood that even though their infant had appropriate developmental outcomes at 6-months that did mean that neurological damage occurred. However in one case of an infant, the neurological development became central to the parental decision-making for the infant. Parents became less hopeful as diagnostic examinations continued find more complex conditions that were individually not problematic for the parents, but when the complexity of the infant's illnesses continued to unfold, parents feared that too many complications existed for their daughter to have an acceptable quality of life. Yet, when parents broached the topic of transitioning from aggressive care to palliative care with providers, they were told that withholding/withdrawing treatment was not appropriate for the infant. Not discussing withholding or withdrawing treatment ultimately created conflict between parents and providers due to differences in opinions about the predicted neurological outcomes for the infant. The conflict led to distrust and parents regretted most decisions they made for their infant.

Parental and provider decision-making is complex and many of the decisions within the 6-month trajectory were made within the first 6 hours of birth. Parents felt that the decision-making was appropriate in most cases, but the extent of the infant's injury remains unknown. How parents will evaluate the decision-making when the infant begins to miss developmental milestones is unknown. Results from this dissertation suggest that decision-making is a trajectory and decisions are not made in isolation. Implications for practice include discussing and educating parents during the first 6 months and later about developmental milestones and the importance of continuing therapy, even when the infant appears normal. Providers can also acknowledge to parents, up front, that the extent of the neurological injury is unknown and different providers may have different opinions about the long-term effects. By acknowledging these differences, providers can begin discussing the treatment options with parents and educating them about the specific needs of their infant.