Assessing the Impacts of Silver Nanoparticles on the Growth, Diversity, and Function of Wastewater Bacteria 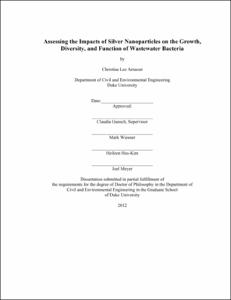 Silver nanoparticles (AgNPs) are increasingly being integrated into a wide range of consumer products, such as air filters, washing machines, and textiles, due to their antimicrobial properties [1]. However, despite the beneficial applications of AgNPs into consumer products, it is likely that their use will facilitate the release of AgNPs into wastewater treatment plants, thereby possibly negatively impacting key microorganisms involved in nutrient removal. For this reason, it is important to characterize the effects of AgNPs in natural and engineered systems and to measure the antimicrobial effect of AgNPs on wastewater microorganisms. Polyvinyl alcohol coated AgNPs have already been linked to decreased nitrifying activity [2] and it is important to determine if AgNPs coated with other materials follow similar trends. Furthermore, it is likely that, with repeated exposure to AgNPs microbial communities could evolve and develop resistance to silver. Thus, a long-term effect of silver nanoparticle exposure could be a reduction of the efficacy of such products in a similar fashion to the development of microbial antibiotic resistance [3]. Therefore, it is critical that the impacts of these materials be ascertained in wastewater treatment systems to prevent long-term negative effects.

The objectives of this dissertation were to: 1) characterize the effect of several different AgNPs on the ammonia oxidizing bacterium (AOB) Nitrosomonas europaea and investigate possible mechanisms for toxicity, 2) test the effects of consumer product AgNPs on a wide range of heterotrophic bacteria, 3) evaluate the effects of AgNPs on bench scale wastewater sequencing batch reactors, and lastly 4) assess the impacts on microbial communities that are applied with AgNP spiked wastewater biosolids.

First, Nitrosomonas europaea was was selected because wastewater nitrifying microorganisms carry out the first step in nitrification and are known to be sensitive to a wide range of toxicants [4].The antimicrobial effects of AgNPs on the AOB N. europaea were measured by comparing nitrite production rates in a dose response assay and analyzing cell viability using the LIVE/DEAD® fluorescent staining assay. AgNP toxicity to N. europaea appeared to be largely nanoparticle coating dependent. While PVP coated AgNPs have shown reductions up to 15% in nitrite production at 20 ppm, other AgNPs such as gum arabic (GA) coated showed the same level of inhibition at concentrations of 2 ppm. The first mechanism of inhibition appears to be a post-transcriptional interference of AMO/HAO by either dissolved Ag or ROS, in treatments where membranes are not completely disrupted but nitrite production decreased (2 ppm GA AgNP and 2 ppm PVP AgNP treatments). The disruption of nitrification is dependent on AgNP characteristics, such as zeta potential and coating, which will dictate how fast the AgNP will release Ag+ and ROS production Finally, total membrane loss and release of internal cellular matter occur.

In order to test the effects of AgNP products available to consumers, simple bacterial toxicity tests were carried out on well-studied heterotrophic bacteria. A model gram-positive and gram-negative bacterium (B. subtilis and E. coli, respectively) was selected to assess any differences in sensitivity that may occur with the exposure to AgNPs. A third model gram-negative bacterium (P. aeruginosa) was chosen for its biofilm forming capabilities. In addition to testing pure nanoparticles, three silver supplements meant for ingestion, were randomly chosen to test with these three bacteria. Growth curve assays and LIVE/DEAD staining indicate that the consumer product AgNPs had the most significant inhibition on growth rates, but not membrane integrity. Overall, P. aeruginosa was most negatively affected by all AgNPs with nearly 100% growth inhibition for all 2 ppm AgNP treatments. TEM imaging also confirmed cell wall separation in P. aeruginosa and internal density differences for E. coli. The effects on B. subtilis, a gram-positive bacterium, were not as severe but toxicity was observed for several AgNPs at concentrations greater than 2 ppm. Citrate AgNPs appeared to have the most impact on membrane integrity, while other mechanisms such as internal thiol binding might have been at work for other AgNPs.

The effects of varying concentrations of pure AgNPs on complex microbial wastewater reactors are currently being tested. Eight bench-scale sequencing batch reactors were set up to follow the typical "fill, react, settle, decant, idle" method with an 8 hour hydraulic retention time and constant aeration. Reactors were fed synthetic wastewater and treatment efficiency is measured by monitoring effluent concentrations of COD, NH4+, and NO3-. The reactors were seeded with 500 mL of activated sludge from a local wastewater treatment plant. After reaching steady state, the reactors were spiked with 0.2 ppm gum arabic and citrate coated AgNPs. Treatment efficiency was monitored and results showed significant spikes and ammonia and COD immediately following the first spike, but the microbial community appeared to adapt for future AgNP spikes. Microbial community analysis (terminal restriction fragment length polymorphism) showed confirmed this hypothesis.

Overall, this dissertation asserts that by examining AgNP coating type, Ag+ dissolution rates and Stern layer surface charge, it may be possible to predict which AgNPs may be more detrimental wastewater treatment, but not all AgNPs will have the same effect. The results obtained herein must be expanded to other types of AgNPs and microorganisms of ecological importance.