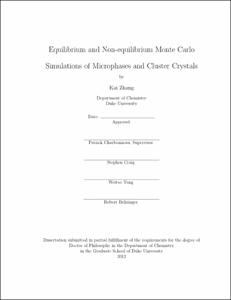 Soft matter systems exhibiting spatially modulated patterns on a mesoscale are characterized by many long-lived metastable phases for which relaxation to equilibrium is difficult and a satisfactory thermodynamic description is missing. Current dynamical theories suffer as well, because they mostly rely on an understanding of the underlying equilibrium behavior. This thesis relates the study of two canonical examples of modulated systems: microphase and cluster crystal formers. Microphases are the counterpart to gas-liquid phase separation in systems with competing short-range attractive and long-range repulsive interactions. Periodic lamellae, cylinders, clusters, etc., are thus observed in a wide variety of physical and chemical systems, such as multiblock copolymers, oil-water surfactant mixtures, charged colloidal suspensions, and magnetic materials. Cluster crystals in which each lattice site is occupied by multiple particles are formed in systems with steep soft-core repulsive interactions. Dendrimers have been proposed as a potential experimental realization. In order to access and understand the equilibrium properties of modulated systems, we here develop novel Monte Carlo simulation methods. A thermodynamic integration scheme allows us to calculate the free energy of specific modulated phases, while a [N]pT ensemble simulation approach, in which both particle number and lattice spacing fluctuate, allows us to explore their phase space more efficiently. With these two methods, we solve the equilibrium phase behavior of five schematic modulated-phase-forming spin and particle models, including the axial next-nearest-neighbor Ising (ANNNI) model, the Ising-Coulomb (IC) model, the square-well linear (SWL) model, the generalized exponential model of index 4 (GEM-4) and the penetrable sphere model (PSM). Interesting new physics ensues. In the ANNNI layered regime, simple phases are not found to play a particularly significant role in the devil's flowers and interfacial roughening plays at most a small role. With the help of generalized order parameters, the paramagnetic-modulated critical transition of the ANNNI model is also studied. We confirm the XY universality of the paramagnetic-modulated transition and its isotropic nature. With our development of novel free energy minimization schemes, the determination of a first phase diagram of a particle-based microphase former SWL is possible. We identify the low temperature GEM-4 phase diagram to be hybrid between the Gaussian core model (GCM) and the PSM. The system additionally exhibits S-shaped doubly reentrant phase sequences as well as critical isostructural transitions between face-centered cubic (FCC) cluster solids of different integer occupancy. The fluid-solid coexistence in the PSM phase diagram presents a crossover behavior around T~0.1, below which the system approaches the hard sphere limit. Studying this regime allows us to correct and reconcile prior DFT and cell theory work around this transition.