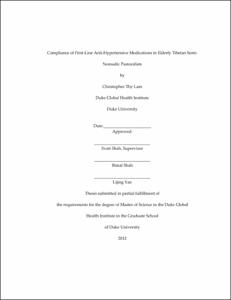 The burden of hypertension and subsequent in Tibet is quite profound and disproportionate when compared to other Chinese populations. Thus, there has a recent impetus to focus on low-cost sustainable health interventions to ameliorate this tremendous burden. Factors of compliance of first-line low dose hypertensive medications are not known in semi-nomadic Tibetan herdsmen at high altitude.