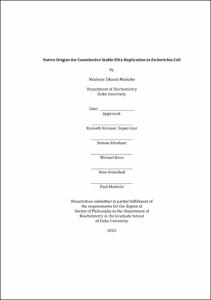 Constitutive stable DNA replication (cSDR) is an alternative mode of replication initiation in Escherichia coli. cSDR is active in rnhA and recG mutants, which lack proteins that remove DNA-RNA hybrids called R-loops. The mechanism for cSDR initiation, therefore, is thought to involve these R-loop structures, which are proposed to form at specific locations known as oriK sites on the chromosome. Thus far, oriK sites have only been mapped to broad, 100-200 kb regions on the chromosome, so the specific elements involved in initiation are still unknown. My research focused on localizing the oriK sites on the chromosome, specifically those in the terminus region, where two of the major oriK sites had previously been mapped. We used two-dimensional gel electrophoresis (Friedman & Brewer, 1995) to analyze the replication forks that are blocked at the innermost Ter sites at the terminus, and found that elevated levels of replication forks are blocked at the Ter sites in rnhA mutants. We also used microarray and deep sequencing analysis to determine that there is a major location of oriK activity in the chromosome, located in the region between TerA and TerC. Furthermore, we also studied the use of the activation-induced deaminase (AID) enzyme as a tool for identifying regions of R-loop formation in the chromosome, and learned about its properties in the process.