Comparative Studies of Numerical Cognition in Nonhuman Primates: From Numerical Comparison to Arithmetic 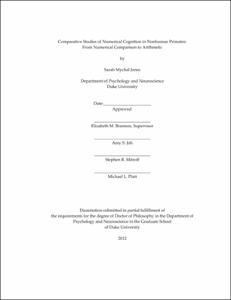 There is a long-standing claim that humans and nonhuman primates share an evolutionarily ancient system of nonverbal number representation. By and large, the focus in the field has been on providing existence proofs of numerical competence in wide-ranging taxa or using individual species as models for comparisons with humans. Recent findings in numerical cognition have suggested that evidence for approximate numerical abilities in nonhuman species may indicate that humans and animals share a cognitive system for representing numerosities nonverbally. To date, little is known about the contextual and quantitative limits of that system, or how those limits differ between species. The studies presented here take a comparative, behavioral approach to characterizing species differences and similarities in the approximate number system, and the contexts that affect that system. Collectively, this set of studies provides evidence that the approximate number system evolved in primates as a malleable system in which numerical representations are accessed spontaneously and improved through training. Despite the sensitivity of the system to experience and context individual differences in sensitivity are greater than species differences suggesting that the selective pressures that constrained its evolution were early and general and that species variation in social group size and diet have less influence on the ANS. Finally my studies indicate that the ANS supports approximate arithmetic and is consistent with the idea that ANS representations evolved to allow animals to calculate the world around them.