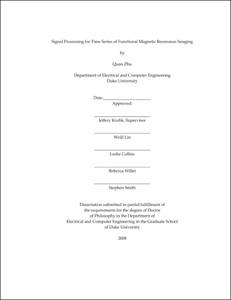 View / Download
2.3 Mb
Date
Author
Zhu, Quan
Advisor
Krolik, Jeffrey
Repository Usage Stats
280
views
405
downloads
Abstract
As a non-invasive method, functional MRI (fMRI) has been widely used for human brain mapping. Although many applications have been done, there are still some critical issues associated with fMRI. Perfusion-weighted fMRI (PWI) with exogenous contrast agent suffered from the problems of recirculation, which could contaminate the cerebral blood flow (CBF) estimation and make its ability of prediction "tissue-at-risk" in debate. We propose a rapid and effective method that combines matched-filter-fitting (MFF) and ICA where ICA was used for regions with a prolonged TTP and MFF was utilized for the remaining areas. The calculation of cerebral hemodynamics afterwards demonstrates that the proposed method may lead to a more accurate estimation of CBF. The extent to which CBF is reduced in relationship to normal values has been utilized as an indicator to discern ischemic injury. However, despite the well known difference in CBF between gray and white matter, relatively little attention has been given as to how CBF may be differently altered in gray and white matter during ischemia due to the inability to accurately separate gray and white matter. To this end, we propose a robust clustering method for automatic classification of perfusion compartments. The method is first to apply a robust principal component analysis to reduce dimension and then to use a mixture model of multivariate T distribution for clustering. Our results in ischemic stroke patients at the hyperacute phase show the clear advantage over the conventional technique. BOLD fMRI, as a feasible and preferred method for developmental neuroimaging, is seldom conducted in pediatric subjects and therefore the information about brain functional development in the early age is somewhat lacking. To this end, this dissertation also focuses on how functional brain connectivity may be present in pediatric subjects in a sleeping condition. We propose a statistical method to delineate frequency-dependent brain connectivity among brain activation regions, and an automatic procedure combined with spatial ICA approach to determine the brain functional connectivity. Our results suggest that functional connectivity exists as young as two weeks old for both sensorimotor and visual cortices and that functional connectivity is highly age-dependent.
Type
Dissertation
Department
Electrical and Computer Engineering
Subject
Engineering, Electronics and Electrical
fMRI
DSC
MRI
perfusion segmentation
functional connectivity
Permalink
https://hdl.handle.net/10161/602
Citation
Zhu, Quan (2008). Signal Processing for Time Series of Functional Magnetic Resonance Imaging. Dissertation, Duke University. Retrieved from https://hdl.handle.net/10161/602.
Collections
More Info
Show full item record