Reading Galatians As Rhetorical Parody: Paul's Reinterpretation of Scriptural Demands for Obedience to the Law and the Implications for Understanding Faithfulness and Apostasy 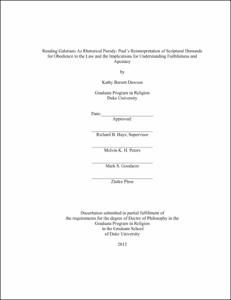 Vastly different opinions exist within New Testament scholarship regarding the relationship between Paul's ethical exhortations in Gal 5-6 and the theological portions of the letter. In an attempt to argue for the cohesiveness of Paul's argument in the letter as a whole, numerous commentaries outline the letter according to the principles that are described in the ancient handbooks on Greco-Roman rhetoric. Although outlining Galatians according to the typical parts of an ancient speech does provide a way of viewing the correspondence as a coherent argument, studying Galatians from the standpoint of Paul's adherence to the conventions of the technical rhetorical handbooks has produced problems of its own. First, there is no consensus as to whether or not Paul actually had obtained the highest level of rhetorical education in which the handbooks were studied. While some commentaries on Galatians (e.g., those written by Hans Dieter Betz and Ben Witherington III) propose that the apostle exhibits a rhetorical strategy in the letter that follows the conventions described in the rhetorical handbooks, other studies (e.g., the one by R. Dean Anderson Jr.) that compare Paul's letters with ancient rhetorical theory have concluded that Paul most likely had no knowledge of the principles of the rhetorical handbooks of his day. Another problem with minutely analyzing Galatians in terms of the conventions described in the ancient rhetoric handbooks is that Galatians is a letter, not a speech. Although ancient letters did usually follow the conventions of ancient epistolary theory, de Boer has most recently pointed out that efforts to classify Galatians as a particular type of rhetoric are misguided since ancient letters were freer compositions than ancient speeches. J. Louis Martyn has proposed that Galatians should be understood as an apocalyptic sermon and, therefore, since Paul was a divine messenger in preaching the gospel, the letter does not actually follow the conventions of a particular classification of ancient rhetoric. However, even scholars who propose that Paul had no technical knowledge of the rhetorical handbooks admit that certain rhetorical principles of speech and letter writing were ubiquitous in the Greco-Roman world. <br>

This dissertation argues that one of the rhetorical principles that was prevalent in the first-century Greco-Roman world was the device of rhetorical parody. Although the word "parody" is usually associated today with the connotation of burlesque or absurdity, a type of humorous parody that did exist in the ancient world, ancient <italic>rhetorical</italic> parody should be understood as either an altered quotation of a recognizable text or saying or a newly created saying that closely resembles a recognizable one. Also, ancient rhetorical parody should be understood as a stylistic rhetorical device that was designed to add vividness and polemical intensity to an argument by way of incongruity. In an effort to persuade an audience, a recognizable text or saying was transformed and given a new meaning, one that might be quite incongruous with its original meaning. While this type of rhetorical device was discussed by ancient rhetoricians, its use was common in the everyday conversations of a literate person in the first century. Therefore the ability to use the device of rhetorical parody did not require a rhetorical education in which one studied the handbooks. Rather, it was a process by which a person altered an existing saying or text, possibly one that had been used by one's opponent in an argument, in order to gain an advantage over the opponent. Ancient rhetorical parody differs from irony in that irony presents a meaning different from the normal meaning of the words spoken. Irony, therefore, does not require an underlying saying or text.<br>

After determining a definition of ancient rhetorical parody, this study investigates whether or not an understanding of Paul's use of rhetorical parody in Galatians might clarify some of Paul's puzzling statements. The investigation is limited to the statements that Paul made in Galatians and does not attempt to understand the letter via Paul's other letters. This study seeks to determine if Paul's scriptural quotations and allusions might be a parodic reinterpretation of Scriptures that demanded Torah-obedience in order to dissociate obeying the Mosaic law from faithfulness to God. The study is not limited to the Scriptures that were later canonized by the Church, but it is limited to the Greek text of writings since rhetorical parody is a play on the words of the hypotext. <br>

A comparison of Galatians with Scriptures that demanded obedience to the Mosaic law or praised individuals who championed the law reveals that Paul parodically reinterpreted scriptural passages in order to dissociate the rejection of the Mosaic law from the curse of the law. The curse of the law is shown to refer not only to slavery, but also to spiritual death. This study also reveals that the law-free Galatians were being excluded from the faith community on the basis that they were unrepentant sinners. Additionally, Gal 3-4 is best understood as Paul's argument against the confluence of the covenant with Abraham and the Mosaic law. <br>

This dissertation concludes that understanding Paul's use of rhetorical parody not only clarifies several puzzling statements in the letter, but also demonstrates that Paul's exhortations in Gal 5-6 address the Galatian situation just as much as the theological sections do. <br>