Studies on adenine nucleotide states and their role in human MutS&alpha; function 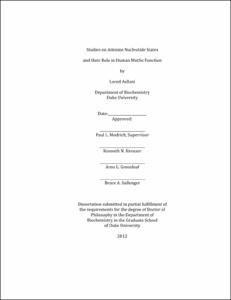 Mismatch repair is a conserved pathway that corrects errors resulting from the misincorporation of bases during DNA synthesis or from the production of damaged bases. The mismatch repair pathway is initiated by MutS homologs, proteins that recognize and bind the mispaired bases and set in motion a series of steps that results in the eventual removal of the offending base. The information must be transmitted from the mismatch to a strand signal site to initiate repair and several models have been proposed to describe the mode of interaction between the mismatch and the strand signal site. These models posit either MutS homolog movement from the mismatch to initiate repair, or activation of downstream events while MutS homologs remain bound to the mismatch. In the human system, the mismatched bases are recognized by MutS&alpha;, a heterodimer of two MutS homologs, MSH2 and MSH6. Both subunits each have an adenine nucleotide binding site that is also involved in ATP hydrolysis. The role of nucleotide binding and ATP hydrolysis has been a subject of controversy with some studies suggesting that ATP hydrolysis is required for MutS&alpha; movement from the mismatch and other studies suggesting that ATP binding but not hydrolysis is necessary for movement. We, therefore, employed different methods to further elucidate the nucleotide requirements for MutS&alpha; function. Because MutS&alpha; is a heterodimer with each subunit involved in nucleotide binding, there are 9 possible nucleotide states of the protein. We used UV cross-linking and filter-binding studies to determine the functional states of MutS&alpha; and found that MutS&alpha; can bind ADP and ATP at the same time with ADP occupying MSH2 and ATP occupying MSH6. Surface plasmon resonance studies suggest that this nucleotide state of MutS&alpha; is important for protein dissociation from mismatch and movement along the DNA helix as well as the formation of the MutS&alpha;-MutL&alpha;-mismatch ternary complex, a key step in repair initiation. Studies with poorly hydrolyzable or non-hydrolyzable ATP analogs and ATP hydrolytic constructs of MutS&alpha; also suggest that ATP hydrolysis may play a role in mismatch dissociation and ternary complex formation. Our results suggest that both the ADP-ATP state of the protein and ATP hydrolysis are necessary for efficient dissociation from mismatch and for efficient ternary complex formation. The surface plasmon resonance studies also suggest that after initial binding of the mismatch by a MutS&alpha; dimer, a second dimer is recruited which can move along the DNA in a hydrolysis independent manner. This second dimer can bind on either side of the first dimer, and when moving towards the mismatch, it can displace the first dimer and take its place at the mismatch site.