Swept into the Abyss: A Family History of Cornish Methodism, Missionary Networks and the British Empire, 1789-1885 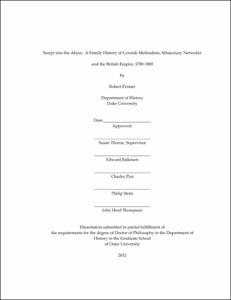 On Christmas Day in 1788, on the eve of a year which was to see the entire Atlantic world once more convulsed with revolution and war, a struggling farmer and occasional fisherman from the village of Mousehole in western Cornwall turned his back on the sea. William Carvosso had never found maritime life to his liking, and for some time been looking for an opportunity to, in his words, support himself and his family "wholly on the land." So when that opportunity finally did arise Carvosso was quick to move his young family to a rented farm near the inland village of Ponsanooth. With a little capital and zealous stewardship Carvosso began to thrive in his new home. The move, which at first glance seemed to take the family from cosmopolitan littoral to parochial isolation, was actually the first step of an intergenerational journey that saw Carvosso's children and grandchildren witness convict hangings in Van Diemen's Land, the Tai-ping Rebellion in Shanghai, Blackfoot and Plains Cree horse raids on the Great Plains, and the trafficking of indentured labor from India to the Caribbean. The vehicle which transported the Carvossos about the globe - and which facilitated their rise as a family from the laboring classes to the lower reaches of respectability and beyond - was the Wesleyan Methodist Connexion and its ancillary Missionary Society. The following dissertation is concerned with the Carvossos' movements, and the ideology by which they encouraged, made sense of, and justified their imperial adventures.

The Carvossos left evidence of their activities scattered about the globe. The greatest concentration of material is in church and missionary collections in London, but they also have a presence in a wide range of provincial and colonial archives and newspapers. Their movement allows us to attend to not just the Empire and the Nation, but to the transnational and the local, the provincial and the metropolitan, and the mutual constitution of those various categories. They were never fixed in one site but travelled from their original home in the village of Mousehole, to Van Diemen's Land, New South Wales, Shanghai, Rupert's Land, British Columbia, Jamaica and frequently back to England. The Carvossos identified themselves by turn as Cornish, English, British, or Colonial, depending on their circumstances. Their active participation in transatlantic Methodism, global Evangelicalism, and Cornish Revivalism further complicated the issue of their various imperial identities, and helps reveal the complexities and contradictions of colonial life in the nineteenth-century British Empire.