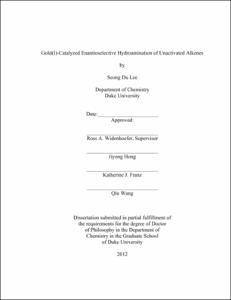 Numerous methodologies for efficient formation of carbon-nitrogen bonds have been developed over the decades due to the widespread importance of nitrogen containing compounds in pharmaceuticals and bulk commercial chemicals. Among many methods, hydroamination, especially, has attracted enormous attention because of its atom-economical characteristic to synthesize amine moieties. As a result, numerous publications have been reported relating the hydroamination reaction using various metal catalysts. However, the hydroamination of unactivated alkenes still remains a challenge task because of the low reactivity of the CC double bond. Recent development of superior gold(I) catalysis in many organic transformations stimulated us to develop efficient gold(I)-catalyzed methods for enantioselective intra- and intermolecular hydroamination of unactivated alkenes.

A gold(I)-catalyzed system for enantioselective intramolecular hydroamination of unactivated alkenes has been developed. For the effective gold(I)-catalyzed method, various gold(I)-catalysts have been synthesized and tested. Among the catalysts, bis(gold) complexes containing an axially chiral bis(phosphine) ligand catalyze the enantioselective intramolecular hydroamination of unactivated alkenes with carboxamide derivatives, most effectively. The method was effective for both carbamates and ureas to form pyrrolidine derivatives with up to 85 % ee.

Polymer-embedded ligands have been synthesized to demonstrate proofs of concepts for fluxional mechanocatalysis. We applied a certain shear stress using a rheometer in the course of palladium-catalyzed asymmetric allylic alkylation to examine catalytic reactivity change under the mechanical force.