The Development of Structure and Centrality in the Self System: Implications for Appearance Concerns 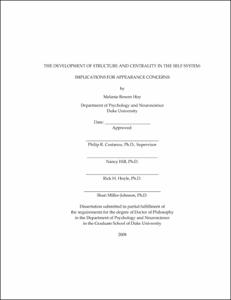 View / Download
713.8 Kb
Date
Author
Hoy, Melanie B.
Advisor
Costanzo, Philip
Repository Usage Stats
445
views
693
downloads
Abstract
Appearance-related self worth occupies a central role in the self-structure of many individuals. While many social psychological theories may be employed to understand the role of appearance in individuals' self-structures, thus far developmental theories have not been widely used to understand how these structures come to be and how they change throughout development. The current project integrates social and developmental theories of self to understand the role that important domains may play in the development of self-structure. Participants between the ages of 9 and 21 completed a set of questionnaires assessing various self-concept and self-esteem related variables to address these questions, allowing a cross-sectional view of the development of self-structure. In addition, multiple regression analyses were used to address several research questions, and five clear patterns emerged. First, connections between domains of self increase developmentally, a finding which replicates and adds depth to previous self research. Second, discrepancies between how individuals see themselves and how they would ideally like to be are positively related to how connected that domain is within the self-structure. Third, malleability of self worth is negatively related to domain connectedness such that higher levels of connectedness are associated with decreased malleability of self feelings in response to challenges to self-esteem. Fourth, domain importance does not play a strong role in the development of self-structure. Connectedness of domains increases developmentally regardless of individual beliefs about domains. Finally, development of self-structure differs according to the universality of the self domain that is being considered. Universally important cultural areas, such as appearance, show markedly different developmental associations than do domains that are not as universally stressed. Implications of these findings for prevention programs aimed at decreasing centrality of appearance and future directions for research are discussed.
Type
Dissertation
Department
Psychology
Subject
Psychology, Developmental
development of self
self
structure
physical appearance and self
concept
Permalink
https://hdl.handle.net/10161/617
Citation
Hoy, Melanie B. (2008). The Development of Structure and Centrality in the Self System: Implications for Appearance Concerns. Dissertation, Duke University. Retrieved from https://hdl.handle.net/10161/617.
Collections
More Info
Show full item record