Characterization and Implications of Surface Hydrophobicity in Nanoparticle Fate and Transport 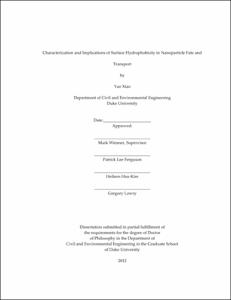 Surface chemistry plays an essential role in determining the reactivity, bioaccessibility, bioavailability and toxicity of nanoparticles (NPs) in the environment. Processes such as aggregation, deposition and biouptake are controlled in part by the attachment efficiency, &#945;, between particles and the surfaces they encounter. One premise of this research is that surface hydrophobicity is a pivotal property of NP surfaces that can affect the behavior of NPs in aquatic environment and potentially decide the fate and transport of NPs. However, there are multiple challenges in the characterization of hydrophobicity for NPs. Methods developed for macroscopic surfaces or organic compounds may not be readily applied or interpreted for the case of nano-scale surfaces. This dissertation addresses theoretical basis for applying methods to determining hydrophobicity of NPs. The use of an octanol-water partitioning method analogous to that used for organic compounds was evaluated on the basis of trends anticipated by thermodynamics, and by experimental observations. This work shows that partitioning of NPs in two phases systems, such as water and octanol, is not uniquely determined by hydrophobicity, but also influenced by surface charge and particle size. The water-oil interface rather than the bulk phases becomes the thermodynamically favored location for NP accumulation once NPs are larger than 1-10 nm and/or the surface is amphiphilic.

Nonetheless, the relative hydrophobicity of selected NPs, as characterized by adsorption of molecular probes (i.e. organic dye and naphthalene), was consistent with the macroscopic contact angle measurements and octanol-water distribution coefficients. The in-situ adsorption of these molecular probes offers the most solid grounds for measurement of hydrophobicity. Other measure of hydrophobicity or hydrophilicity such as water-affinity based methods that measure water vapor adsorption to nanomaterial powders, or immersion microcalorimetry and thermogravimetric analysis, yielded similar results to the molecular probes. However, possible physical or chemical transformations to NP surfaces during characterization by these other methods limited the use of results to infer hydrophobicity based on a rigorous thermodynamic model.