Dopamine, Drugs, and Estradiol: The Roles of ER&alpha; and ER&beta; in the Mesencephalic Dopamine System and Dopamine-Mediated Behaviors of Mice 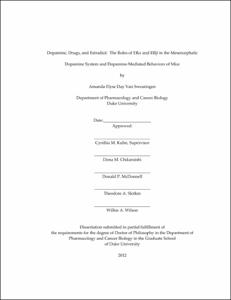 Sex differences in drug addiction are mediated in part by effects of the ovarian hormone estradiol (E2) within the ascending dopamine (DA) system from the midbrain to the striatum. Estradiol enhances the effects of psychostimulants, but the exact underlying mechanisms are unknown. Mice could serve as an ideal genetically-tractable model for mechanistic studies into sex and hormone effects within the DA system but have been under-utilized. This study sought to: 1) characterize psychostimulant-induced behavior in mice as an indirect but quantifiable measure of DA neurotransmission, and 2) elucidate the mechanism underlying E2's enhancement of psychostimulant effects in females using surgical, pharmacological, and genetic manipulations. The spontaneous behavior of mice during habituation to a novel environment and after the psychostimulants d-amphetamine (AMPH; 1, 2.5, and/or 5 mg/kg) and cocaine (COC; 5, 15, and/or 30 mg/kg) were assessed in open field chambers using both automated photobeam interruptions and behavioral observations. Behaviors were assessed in the following groups of mice: intact males and females; ovariectomized mice replaced with either E2 for 2 days or 30 minutes or with estrogen receptor-selective agonists; and female mice lacking either ER&alpha; (&alpha;ERKO) or ER&beta; (&beta;ERKO) versus wildtype (WT) littermates. Brain psychostimulant concentrations and tissue content of DA and its metabolites were determined at the time of maximum behavioral stimulation. Psychostimulants induced behavioral activation in mice including both increased locomotion as detected with an automated system and a sequence of behaviors progressing from stereotyped sniffing at low doses to patterned locomotion and rearing at high doses. Intact female mice exhibited more patterned locomotion and a shift towards higher behavior scores after psychostimulants despite having lower AMPH and equivalent COC brain levels as males. Actively ovariectomized mice exhibited fewer ambulations and lower behavior scores during habituation and after psychostimulants than Sham females. Two days but not 30 minutes of E2 replacement restored COC-induced behavioral responses to Sham levels. ER&alpha;-selective PPT replacement in ovariectomized mice and genetic ablation of ER&alpha; in &alpha;ERKO mice altered COC-stimulated behavior. Immunohistochemistry revealed that midbrain DA neurons in mice express ER&beta; but not ER&alpha;, and that non-DA cells in the midbrain and the striatum express ER&alpha;. These results indicate that E2 enhances COC-stimulated locomotion in mice through an indirect effect of ER&alpha;. ER&alpha; may alter behavior through presynaptic effects on DA neuron activity and/or through postsynaptic effects on transcription and signal transduction pathways within striatal neurons.