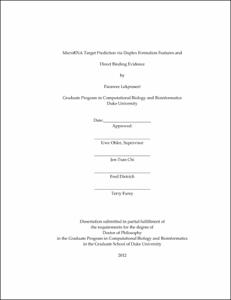 MicroRNAs (miRNAs) are small RNAs that have important roles in post-transcriptional gene regulation in a wide range of species. This regulation is controlled by having miRNAs directly bind to a target messenger RNA (mRNA), causing it to be destabilized and degraded, or translationally repressed. Identifying miRNA targets has been a large area of focus for study; however, a lack of generally high-throughput experiments to validate direct miRNA targeting has been a limiting factor. To overcome these limitations, computational methods have become crucial for understanding and predicting miRNA-gene target interactions.

While a variety of computational tools exist for predicting miRNA targets, many of them are focused on a similar feature set for their prediction. These commonly used features are complementarity to 5'seed of miRNAs and evolutionary conservation. Unfortunately, not all miRNA target sites are conserved or adhere to canonical seed complementarity. Seeking to address these limitations, several studies have included energy features of mRNA:miRNA duplex formation as alternative features. However, different independent evaluations reported conflicting results on the reliability of energy-based predictions. Here, we reassess the usefulness of energy features for mammalian target prediction, aiming to relax or eliminate the need for perfect seed matches and conservation requirement.

We detect significant differences of energy features at experimentally supported human miRNA target sites and at genome-wide interaction sites to Argonaute (AGO) protein family members, which are essential parts of the miRNA machinery complex. This trend is confirmed on data sets that assay the effect of miRNAs on mRNA and protein expression changes, where a statistically significant change in expression is noted when compared to the control. Furthermore, our method also allows for prediction of strictly imperfect sites, as well as non-conserved targets.

Recently, new methods for identifying direct miRNA binding have been developed, which provides us with additional sources of information for miRNA target prediction. While some computational target predictions tools have begun to incorporate this information, they still rely on the presence of a seed match in the AGO-bound windows without accounting for the possibility of variations.

We investigate the usefulness of the site level direct binding evidence in miRNA target identification and propose a model that incorporates multiple different features along with the AGO-interaction data. Our method outperforms both an ad hoc strategy of seed match searches as well as an existing target prediction tool, while still allowing for predictions of sites other than a long perfect seed match. Additionally, we show supporting evidence for a class of non-canonical sites as bound targets. Our model can be extended to predict additional types of imperfect sites, and can also be readily modified to include additional features that may produce additional improvements.