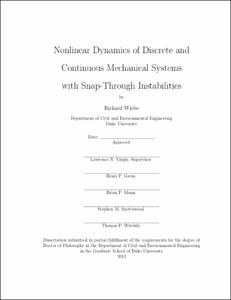 The primary focus of this dissertation is the characterization of snap-through buckling of discrete and continuous systems. Snap-through buckling occurs as the consequence of two factors, first the destabilization, or more often the disappearance of, an equilibrium position under the change of a system parameter, and second the existence of another stable equilibrium configuration at a remote location in state space. In this sense snap-through buckling is a global dynamic transition as the result of a local static instability.

Another useful indicator of snap-through is the presence of chaos in the dynamic response of a system. Chaos is usually associated snap-through, as in many systems large amplitude responses are typically necessary to sufficiently engage the nonlinearities that induce chaos. Thus, a pragmatic approach for identifying chaos in experimental (and hence noisy) systems is also developed. The method is applied to multiple experimental systems showing good agreement with identification via Lyapunov exponents.

Under dynamic loading, systems with the requisite condition for snap-through buckling, that is co-existing equilibria, typically exhibit either small amplitude response about a single equilibrium configuration, or large amplitude response that transits between the static equilibria. Dynamic snap-through is the name given to the large amplitude response, which, in the context of structural systems, is obviously undesirable. This phenomenon is investigated using experimental, numerical, and analytical means and the boundaries separating safe (non-snap-through) from unsafe (snap-through) dynamic response in forcing parameter space are obtained for both a discrete and a continuous arch. Arches present an ideal avenue for the investigation of snap-through as they typically have multiple, often tunable, stable and unstable equilibria. They also have many direct applications in both civil engineering, where arches are a canonical structural element, and mechanical engineering, where arches may be used to approximate the behavior of curved plates and panels such as those used on aircraft.