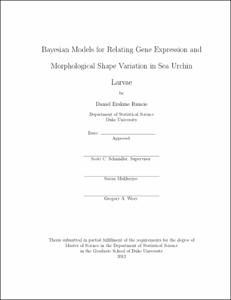 A general goal of biology is to understand how two or more sets of traits in an organism are related - for example, disease state and genetics, physiology and behavior, or phenotypic variation and gene function. Many of the early advancements in statistical analysis dealt with relating measured traits when one could be represented as a single number. However, many traits are inherently multi-dimensional, and technologies are advancing for rapidly measuring many types of such highly complex traits. Making efficient use of these new, larger datasets requires new statistical models for to biological inference. In this thesis, I develop a method for relating two very different types of traits in sea urchin larvae: morphological shape, and developmental gene expression. In particular, I develop an approach for regression modeling using <italic>shape</italic> as a response variable. I use this method to address the question of whether variation in the expression of regulatory genes during development predicts later morphological variation in the larvae. I propose a hierarchical random effects factor regression model with shape as a response variable for relating morphology and gene expression when the individuals in each dataset are related, but not identical. I fit an approximation to the general model by breaking it into three discrete steps. I find that gene expression can explain ~25% of mean symmetric form variation among cultures of related larvae, and identify several groups of related genes that are correlated with aspects of morphological variation.