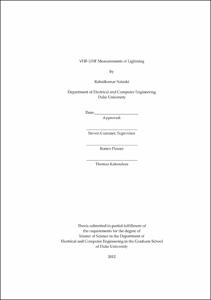 Universal software radio peripheral (USRP) was utilized to receive the radiation produced by lightning flashes in VHF and UHF bands, with the bandwidth ranging from 2MHz to 8MHz. The software radio was programmed to record this radiation by integrating GPS clock and absolute timing. Moreover, two USRP N210 were employed to simultaneously record data at VHF and UHF bands with different programmable gain settings. This data was compared with the data from National Lightning Detection Network (available as location, type and peak current of lightning) and the magnetic sensor operating at LF (30 to 300 kHz). The output of USRP is the antenna displacement current &#8706;E/&#8706;t (uncalibrated) and of LF magnetic sensor is the induced voltage &#8706;B/&#8706;t. From comparison, the following results were obtained. K processes or regular pulse bursts in both cloud and cloud to ground discharges were clearly visible at UHF-VHF-LF. These processes were even visible at VHF with 0 dB gain, if superimposed on high magnitude slow (electric field change) processes such as J process probably. Distant Narrow bipolar pulses were observed with significant magnitude at VHF. Initial breakdown in cloud discharge was strong at LF and VHF but not significant at UHF. Instead the short pulses, probably stepped leaders, with 1 to 2.5 µs of time duration produced high magnitudes at UHF (while LF pulses remained small yet visible). Moreover, in few cloud discharges some processes occurring during final stage produced strong VHF-UHF radiation.