A "Right for Every American:" Understanding the Concept of a "Human Right to Health" in the Context of the Patient Protection and Affordable Care Act 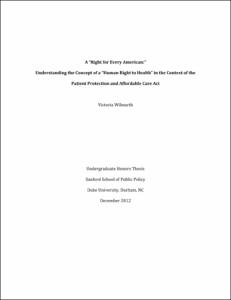 View / Download
1.7 Mb
Date
Author
Wilmarth, Victoria
Repository Usage Stats
448
views
1,112
downloads
Abstract
This project examines the role that the concept of a “human right to health” played in the passage of the Patient Protection and Affordable Care Act (PPACA). It analyzes this topic through the study of speeches made by President Obama and a study of the media through a selection of newspaper op-ed pieces and radio news stories. Key speeches made by candidate Obama during the 2008 presidential campaign were also considered to provide greater context for the health care reform debate. The concept of a “human right to health” played a minimal role in the media during the health care reform debate. Instead, the media discussion emphasized the financial needs and potential implications of reform. Media coverage also chronicled political components of the debate, in addition to a variety of divisive sub-issues. Yet, an “American right” to health played an important role in the rhetorical arc President Obama employed in order to secure the passage of the PPACA. President Obama utilized two key frameworks to discuss health care reform: namely, an American values and responsibilities framework and a financial framework. He adjusted his rhetoric and policy framing strategies according to his audience: the American Public or Congress. Ultimately both frameworks were necessary in order to pass the PPACA. This research has implications for the President’s continued health care work as he and other leaders work to implement the PPACA. It is also relevant to future health care reform efforts and human rights activism at both national and state levels.
Description
Honors Thesis in Public Policy
Type
Honors thesis
Department
Public Policy Studies
Subject
Human right to health
right to health
health policy
health care reform
Patient Protection and Affordable Care Act (PPACA)
Barack Obama
Permalink
https://hdl.handle.net/10161/6211
Citation
Wilmarth, Victoria (2012). A "Right for Every American:" Understanding the Concept of a "Human Right to Health" in the Context of the Patient Protection and Affordable Care Act. Honors thesis, Duke University. Retrieved from https://hdl.handle.net/10161/6211.
Collections
More Info
Show full item record