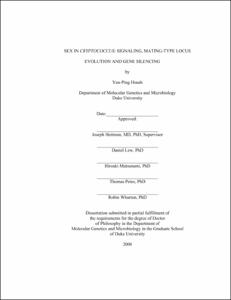 Fungi have a genetically controlled sex determination system, which is governed by a small, sex-specific region in the genome called the mating-type locus (MAT). In the basidiomycetous yeast Cryptococcus neoformans, the pathogen that causes cryptococcal meningitis and cryptococcosis, sex has been associated with virulence. To further understand how sex is genetically regulated in C. neoformans, we focused our studies on the evolution of the MAT locus and molecular dissection of the pheromone signaling pathway that controls sexual development. Two MAT-linked meiotic recombination hotspots that likely drove the assembly and rearrangement of MAT were identified. Fine mapping through the integration of genetic markers established that two hotspots, one on each side of the MAT locus, are located in an ~10 kb and ~5 kb region. Plotting the G + C content along MAT and the flanking regions revealed a strong association between the location of these two hotspots and a high G + C content. By deletion and insertion of the G + C rich region, we demonstrated that the high G + C rich region is required but not sufficient to induce recombination. On the other hand, to provide direct experimental evidence to support the previously proposed model for the evolution of MAT, we sought to recapitulate the ancestral tetrapolar, and the intermediate tripolar mating systems of C. neoformans by manipulating the MAT structure to model a tetrapolar system. In the two modified "a" and "α" strains, the sex-determining genes SXI1α or SXI2a residing at the MAT locus were disrupted and the wild-type allele of these two genes was then reintroduced at another genomic location (URA5) that is unlinked to MAT. Our results show that C. neoformans can complete the sexual cycle with a tetrapolar mating configuration and the transitional tripolar state might be under strong negative selection pressure, which could have facilitated the transition from a tripolar state to the final bipolar mating system.

The MAT locus is the major determinant of the sexual identity of a cell, but several signaling pathways, including the pheromone signaling pathway, are required to regulate mating and sexual development. Many components of the pheromone signaling pathway have been identified; however, it is less clear what lies upstream of the MAPK cascade. To address this question, we studied the role of two Gα subunits (Gpa2, Gpa3) in mating and concluded that they share both redundant and divergent roles in mating. gpa2 gpa3 double mutants, but neither gpa2 nor gpa3 single mutants, are sterile in bilateral crosses. In their GTP-bound form, they signal in opposition: Gpa2 promotes mating whereas Gpa3 inhibits. Furthermore, we also studied the functions of a novel upstream component Cpr2, a pheromone receptor-like gene, in pheromone signaling and sexual development. All lines of evidence suggest that Cpr2 is a constitutive ligand-independent receptor that, when expressed, engages the same G-proteins and activates the same pheromone signaling pathway as the canonical ligand-activated pheromone receptors. Expression of Cpr2 is induced post cell fusion during mating, and likely introduces a positive feedback loop to allow a self-perpetuating signaling state to enable efficient mating. Cells lacking this receptor are fertile, but produce abnormal filamentous structures. Overexpression of CPR2 in a or α cells strongly enhances fruiting, an alternative same-sex mating process in C. neoformans. Therefore, Cpr2 establishes a new paradigm for a naturally occurring constitutively active GPCR that governs cell fate in fungi.

Finally, we described a sex-induced silencing (SIS) phenomenon in C. neoformans. Using genetic approaches, we showed that SIS is triggered by a tandem insertion of a transgene during the sexual cycle. Interestingly, only a proportion of progeny carrying the transgene are silenced. Gene deletion, RIP, or DNA methylation do not contribute to SIS but the RNAi machinery is required. In conclusion, these studies provide further understanding of sex in C. neoformans from different perspectives, which invites comparisons to other fungal and even more broadly, eukaryotic pathogens to address the role of sex in evolution.