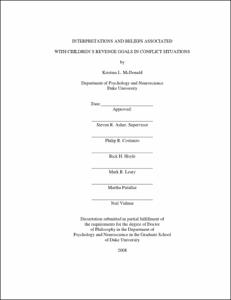 Prior research has found that children who pursue revenge goals in minor conflicts with peers are less accepted, have fewer friends, and have friendships of lower quality. Very little research has been devoted to understanding what factors might increase a child's tendency to seek revenge in minor conflicts of interest or in more provocative situations. The present study was designed to assess several variables that may increase revenge motivations in two contexts: minor conflicts of interest and major provocation situations. Of particular interest were the interpretations that children make in conflict, especially interpretations of rejection and disrespect. Two personal dispositions were also investigated, rejection sensitivity and disrespect sensitivity. The latter was assessed using a measure designed for this study. The study also examined whether beliefs about the legitimacy of aggression and beliefs about negative reciprocity moderate the association between negative interpretations and revenge goals.

Participants were seventh-grade adolescents (n = 367) from a middle school in a midwestern suburban school district. Students were shown vignettes (hypothetical situations) depicting conflict-of-interest situations and major provocation situations. In response to each vignette, participants rated how they would feel, how they would interpret the person's behavior, what their goals would be in the situation, and what behavioral strategies they would enact. Students also completed measures of rejection sensitivity, disrespect sensitivity, reciprocity beliefs, and beliefs about the legitimacy of aggression. Additionally, students indicated which of their grademates were sensitive to rejection and which were sensitive to disrespect.