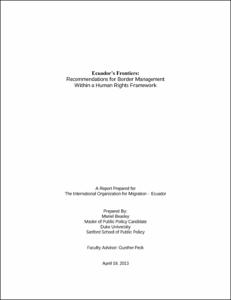 View / Download
605.2 Kb
Date
Author
Beasley, Mariel
Advisor
Peck, Gunther W
Repository Usage Stats
673
views
1,996
downloads
Abstract
EXECUTIVE SUMMARY POLICY QUESTION How can Ecuador effectively control their terrestrial borders in accordance with the human rights framework defined by their 2008 Constitution? RECOMMENDATION (Pg. 8) I recommend that the Ecuadorian government: 1) Gather detailed information in preparation for increasing the number of official terrestrial border posts along the northern border. 2) Continue to prioritize and increase coordination with Colombia in regards to border management. 3) Train, and provide ongoing training for, a civil corps of immigration and customs officials responsible for border management. BACKGROUND AND CHALLENGES (Pg. 1) In 2008, under the leadership of sitting president, Rafael Correa, Ecuador adopted a new constitution. The constitution gave official, domestic legal standing to numerous human rights, including civil, political, economic, social and cultural rights. Additionally, the constitution emphasized the sovereignty of Ecuador while establishing the principle of universal citizenship and freedom of movement for all people. Within this context, Ecuador’s claims to sovereignty can be interpreted as the responsibility to protect both citizens and territorial inhabitants, and therefore Ecuador’s legitimacy depends on its ability to develop border management and migration policies that promote human rights which recognize the right to movement; guarantee a safe and secure place to live and work; and use consistent and established legal channels to address violations in accordance to international standards. The migration situation of Ecuador is rather unique in the Latin American context. The immigrant population is primarily composed of Colombians and Peruvians with migration incentives varying between the two groups. Peruvians largely migrate for increased economic opportunities, while the Colombians face a “push” factor, due to increased armed conflict since 2002 and destruction of coca crops along the southern Colombian border. Ecuador has the largest number of refugees of any country in Latin America. In 2012, there were approximately 123,436 refugees and 21,558 asylum seekers residing in Ecuador, 98% of whom are Colombian. That represents about 1% of the total population. However, political and geographic realities present a significant challenge in maintaining a safe and secure place for residents and asylum-seekers. Ecuador prioritized security on their border with Peru for most of the 20th century, paying little political or military attention to the northern border. Thus, Ecuador’s traditional and current border policy lacks the ability to prevent spillover violence and crime from Colombia. While the geography of the region makes it unlikely that Ecuador could ever completely eliminate unregulated migration, there are steps to be taken to reduce the spillover and use of Ecuador as a sanctuary and training ground for insurgents. Ecuador’s official international entry points include four seaports (Guayaquil, Manta, Esmeraldas and Puerto Bolivar), two airports (Quito and Guayaquil), and five terrestrial entry points. Ecuador currently recognizes an Integration Zone around the border with Colombia and Peru. This zone permits the free movement of goods and people within the designated area as well as supports binational development project, primarily through international funding. Latin America has, historically, been strong proponents for human rights—rights that extend beyond nationality, religion or language. Noting the link between the lack of human rights, including food and economic security, and vulnerability to threats to sovereignty, Ecuador adopted Plan Ecuador in early 2008, attempting to increase development along the northern border. There is significant concern within the Ecuadorian army that the increased presence of insurgents in Ecuador contribute to instability but a more aggressive border defense policy would likely lead to combat and possibly war with the Colombian guerrilla fighters. Ecuador is also acutely aware that the presence of insurgents place additional strain on Ecuador’s diplomatic relations with Colombia Given these competing and conflicting priorities along its border with Columbia, Ecuador faces significant challenges in maintaining national security and protecting citizens and refugees. Especially challenging is the task of monitoring entry points from Columbia to Ecuador, notably land-crossings. Much of the border cuts through thick tropical forests and sparsely populated areas. The northern border is especially vulnerable to human trafficking, contraband, and spill-over violence from paramilitaries and rebel groups due to the political situation in Colombia paired with widespread poverty, dense jungles, limited infrastructure, and a historic absence of state presence on both sides of the border. While there are only three official entry points on the Colombian-Ecuadorian border, there are numerous “unofficial” entry points between the two countries, which are used by locals and insurgents. Many security experts and Ecuadorian army officials believe that Ecuador lacks the resources, personnel, and training to effectively prevent insurgents from entering their territory. While the northern border was largely neglected for many years, the current administration has placed increasing emphasis and increasing military troops on the northern border. Currently, the primary duties of both border security and policing operations fall under the purview of the Army. CRITERIA (Pg. 8) In determining policy recommendations to strengthen Ecuador’s border management system within a framework of human rights, I evaluated best-practices and proposed solutions according to the following criteria: • Promote a safe and secure place to live and work; • Recognize and support the freedom of movement for political, social, and economic reasons; and • Be feasible with given resources, terrain and political will.
Type
Master's project
Department
The Sanford School of Public Policy
Permalink
https://hdl.handle.net/10161/6671
Citation
Beasley, Mariel (2013). Ecuador's Frontiers: Recommendations for Border Management within a Human Rights Framework. Master's project, Duke University. Retrieved from https://hdl.handle.net/10161/6671.
Collections
More Info
Show full item record