RacGap50C Is a Novel Negative Regulator of Wnt Signaling 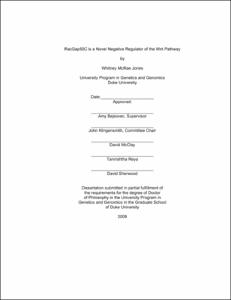 The Wingless (Wg)/Wnt signal transduction pathway directs a variety of cell fate decisions in developing animal embryos. Despite the identification of many Wg pathway components to date, it is still not clear how these proteins work together to generate cellular identities. We have carried out a series of genetic screens in Drosophila to identify new components involved in Wg signaling. Two mutant lines that modify wg-mediated epidermal patterning carry mutations in the RacGap50C gene. These mutations on their own cause cuticle pattern disruptions that include replacement of ventral denticles with naked cuticle, which indicate that the Wg pathway is ectopically activated in mutant embryos. In addition, RacGap50C mutations also interact genetically with naked cuticle and Axin, known negative regulators of the Wg pathway. These phenotypes suggest that the RacGap50C gene product participates in the negative regulation of Wg pathway activity.

In addition to the role of RacGap50C in regulating Wg signaling, RacGap50C, with the kinesin like protein Pavarotti (Pav), is essential for cytokinesis in dividing cells. Surprisingly, Pav, like RacGap50C is able to repress Wnt stimulated reporter gene activity in mammalian tissue culture. Expression of RacGap50C or Pav does not alter the levels of endogenous BetaCatenin, nor does it prevent BetaCatenin from entering the nucleus and binding the transcription factor TCF. However, reporter gene activity is significantly diminished in cells expressing RacGap50C or Pav, indicating an inability of this nuclear BetaCatenin to activate transcription. RacGap50C and Pav are also found in the nucleus of interphase cells and this subcellular localization may be relevant to their role in regulation of the Wnt pathway. Although RacGap50C and Pav colocalize, our data indicate distinct roles for these two proteins in Wnt signaling, as they show different genetic interactions with nkd in Drosophila embryos and with TCF in mammalian cells.