Unraveling the Etiology of Familial Interstitial Pneumonia: Genetic Investigations of a Complex Disease 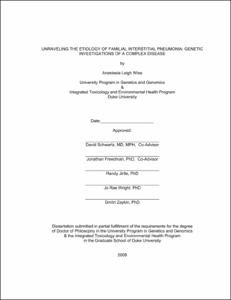 The Idiopathic Interstitial Pneumonias (IIPs) are complex conditions, with limited treatment options and unknown etiology. Thus, given the complex nature of the disease and the likelihood of genetic heterogeneity, phenotypic and environmental factors must be taken into consideration when searching for genetic components involved in IIP. Families with 2 or more cases of IIP (classified as familial interstitial pneumonia, FIP) provide a unique opportunity to study IIP genetics. Therefore, in order to better define the FIP phenotype, families with a homogeneous pattern of disease diagnosis (IPF only, with all individuals diagnosed with IPF) were compared to families with a heterogeneous phenotype (mixed, with multiple different IIP diagnoses within a single family, including at least one case of IPF). Survival was decreased in the mixed (46%) compared to the IPF only (60%) families (p=0.006) along with the mean age of death (69 IPF only, 64 mixed, p=0.007). Surprisingly, the same results were found when only individual diagnosed with IPF from both types of families were compared (survival 40% vs. 60%, p=0.0003 and age of death 65 vs. 69, p=0.03). Using this same phenotypic classification scheme a whole genome microsatellite screen for FIP was conducted. Two peaks suggestive of linkage to chromosome 11 (LOD=3.3) and chromosome 10 (LOD=2.1) were identified in all 82 families, along with a third peak on chromosome 12 only seen in homogeneous families (LOD=2.5). In order to determine if the two linkage peaks seen in all 82 families were the result of genetic heterogeneity, ordered subset analysis (OSA) was conducted. Applying OSA, which uses family level covariate data to define a more homogeneous subset of families that maximize linkage, low linkage to chromosome 11 maximized linkage to chromosome 10 within a subset of 63 of the 83 families (LOD=3.4) and 27 of the mixed families (LOD=5.1). Furthermore, OSA revealed that families with a lower proportion of smokers among affected individuals contributed significantly to evidence in favor of linkage on chromosome 11 (LOD=4.9). It therefore appears that chromosomes 10 and 11 represent distinct susceptibility factors for FIP. Conducting further fine-mapping of the chromosome 11 region also identified 2 potential candidate genes, MUC2 and MUC5AC. Re-sequencing of both genes followed by selective genotyping of the 10 most interesting SNPs revealed 7 SNPs significantly associated with FIP and 7 SNPs significantly associated with IPF, 6 of which were significant in both FIP and IPF cases as compared to spouse controls. A haplotype consisting of 4 SNPs (1 in MUC2 and 3 in MUC5AC) was also found to be significant in both FIP (p=0.002) and IPF cases (p=0.001). While the SNP in MUC2 is intronic, all 3 MUC5AC SNPs produce amino acid changes. Thus, non-synonymous polymorphisms in MUC5AC are associated with both FIP and IPF.