National Power and Military Force: the Origins of the Weinberger Doctrine, 1980-1984 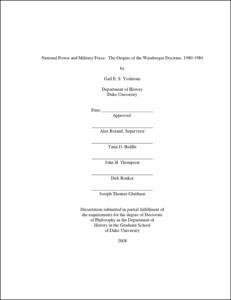 This dissertation addresses one of the most vexing issues in American foreign policy: Under what circumstances should the United States use military force in pursuit of national interests? Despite not having a policy upon entering office or articulating one throughout its first term, the Reagan administration used military force numerous times. Two-weeks following Reagan's landslide reelection victory, Secretary of Defense Caspar W. Weinberger articulated six tests for when and how to use military force, which surprisingly seemed to call for restraint. Through the examination of three case studies, the Reagan administration's decisions are found to have been influenced by the assimilation of lessons from Vietnam, the reading of public pulse, the desire to placate Congress, and the need to protect the nation's strategic interests. All these factors, ultimately codified by Weinberger, were considered by the leaders in the Reagan administration as they tried to expand the military's ability to help the U.S. meet an increasingly wider range of threats. Thus this dissertation will show that, contrary to what one finds in contemporary scholarship, the Weinberger doctrine was intended as a policy to legitimize the use of military force as a tool of statecraft, rather than an endorsement to reserve force as a last resort after other instruments of power have failed.