Save Our Science: How to Inspire a New Generation of Scientists 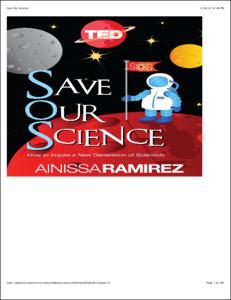 View / Download
11.8 Mb
Date
Author
Ramirez, Ainissa
Repository Usage Stats
811
views
1,169
downloads
Abstract
In Save Our Science: How to Inspire a New Generation of Scientists, long time Yale professor Ainissa Ramirez makes an impassioned call for a recommitment to improve science, technology, engineering, and math (STEM) education in our schools and throughout our society. She describes what habits we need to change to make STEM fun again, as well as a plan for how to increase every child's participation in these disciplines. The 21st century requires a new kind of learner -- not someone who can simply churn out answers by rote, as has been done in the past, but a student who can think expansively and solve problems resourcefully. In order to solve the complex problems of tomorrow, the traditional academic skills of reading, 'riting, and 'rithmetic must be replaced with creativity, curiosity, critical thinking, problem solving, and collaboration skills -- skills inherent in scientific research. About the Author Ainissa Ramirez, Ph.D., (@blkgrlphd) is a science evangelist who is passionate about getting the general public excited about science. Before taking on this calling, she was an associate professor of mechanical engineering and materials science at Yale University. Technology Review, the magazine of the Massachusetts Institute of Technology (MIT), named her as one of the world's 100 Top Young Innovators for her contributions in transforming technology. She has been profiled by the New York Times, Discover and, Fortune magazines, ESPN, CNN, and numerous scientific magazines (Scientific American, R&D Magazine, Materials Today, and Chemical & Engineering News). Ramirez received her training in materials science and engineering from Brown University (Sc.B.) and Stanford University (Ph.D.). Prior to working at Yale, she was a research scientist at Bell Laboratories, Lucent Technologies, in Murray Hill, N.J., where she did award-winning research. She has lectured at the California Institute of Technology (Caltech), MIT, and Harvard, Columbia, Cornell, Princeton, Northwestern, and Stanford universities. A staunch advocate for improving the public's understanding of science, her talk at TED on the importance of science, technology, engineering, and math (STEM) education generated widespread enthusiasm. At Yale, she was the director of the award-winning science lecture series for children called Science Saturdays, and she hosts two popular-science video series called Material Marvels and Science Xplained. She speaks nationally on the importance of making science fun and has served as a science advisor to the American Film Institute, WGBH's Nova, and several science museums. She has written as a science correspondent for Time magazine's Washington, D.C., bureau. Currently, she is co-authoring a book with Allen St. John on the science behind football, called Newton's Football, for Random House.
Type
Book
Permalink
https://hdl.handle.net/10161/6775
Collections
More Info
Show full item record