Nietzsche's Revaluation of Philosophy and Poetry 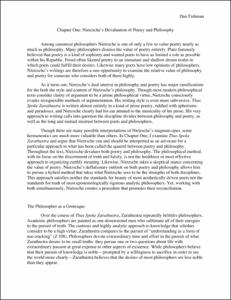 View / Download
282.3 Kb
Date
Author
Fishman, Daniel
Repository Usage Stats
1,917
views
3,040
downloads
Abstract
Nietzsche’s dual interest in philosophy and poetry has major ramifications for the both the style and content of Nietzsche’s philosophy. Though most modern philosophical texts consider clarity of argument to be a prime philosophical virtue, Nietzsche consciously evades recognizable methods of argumentation. His writing style is even more subversive. Thus Spoke Zarathustra is written almost entirely in a kind of prose poetry, riddled with aphorisms and paradoxes, and Nietzsche clearly had his ear attuned to the musicality of his prose. His very approach to writing calls into question the discipline divides between philosophy and poetry. Though there are many possible interpretations of Nietzsche’s magnum opus, some hermeneutics are much more valuable than others. In Chapter One, I examine Thus Spoke Zarathustra and argue that Nietzsche can and should be interpreted as an advocate for a particular approach to what has been called the quarrel between poetry and philosophy. Throughout the text, Nietzsche devalues both poetry and philosophy. The philosophical method, with its focus on the discernment of truth and falsity, is not the healthiest or most effective approach to organizing earthly meaning. Likewise, Nietzsche takes a skeptical stance concerning the value of poetry. Nietzsche’s deflationary outlook on both poetry and philosophy allows him to pursue a hybrid method that takes what Nietzsche sees to be the strengths of both disciplines. This approach satisfies neither the standards for beauty of most aesthetically driven poets nor the standards for truth of most epistemologically rigorous analytic philosophers. Yet, working with both simultaneously, Nietzsche creates a procedure that promotes their harmonization.
Type
Honors thesis
Department
Philosophy
Subject
Nietzsche
Philosophy
Poetry
Thus Spoke Zarathustra
Permalink
https://hdl.handle.net/10161/6814
Citation
Fishman, Daniel (2013). Nietzsche's Revaluation of Philosophy and Poetry. Honors thesis, Duke University. Retrieved from https://hdl.handle.net/10161/6814.
Collections
More Info
Show full item record